LATEST NEWS
SYDNEY
Home Heavy Vehicles When did you last ask the question for your fleet – ute or small truck? 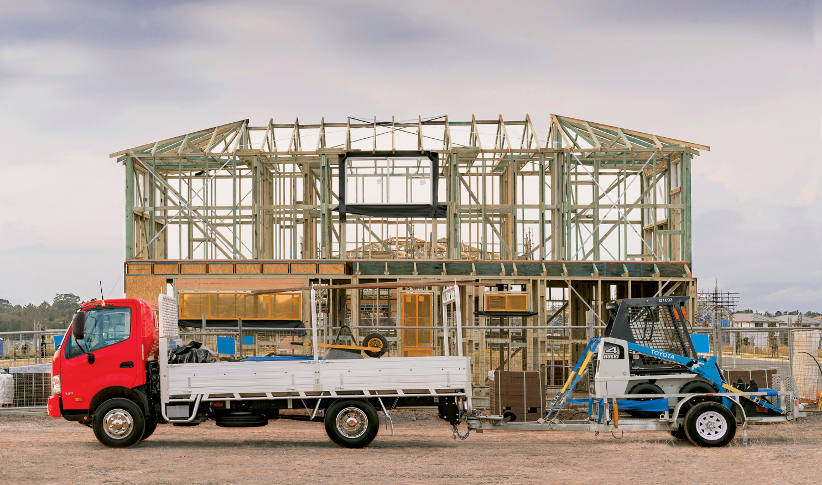 When did you last ask the question for your fleet – ute or small truck?

The release of the Hino 300 Series should definitely get Fleet Managers asking the question again in 2020. Historically the issue is licence requirements and driver training. So many fleets would choose a ute when they really needed a truck.

And now it’s Hino’s turn. On paper, the 300 Series takes the fight to car manufacturers with a range of safety features as standard and claims that the drivability and passenger comfort in the cabin is at a level never seen before in the light truck segment. Because of COVID restrictions Fan won’t get a chance to drive one until September, but using the 500 Series as a guide, we expect the claims to be matched on the road.

“Our range of 300 Series car-licenced trucks offers a level of safety that matches or is better than its light commercial competitors, with the added advantages of a nominal payload of up to 2.5 tonne and the ability to tow a 3.5 tonne trailer,” said Daniel Petrovski, Manager of Product Strategy for Hino Australia.

The new 300 Series will be introduced with Hino SmartSafe, a comprehensive safety package with advanced driver-assist technology that takes an active focus in protecting the life of drivers, passengers and other road users.

“Adding to the appeal of the 300 Series for the trades and delivery markets is the true automatic transmission, which makes the transition from a one tonne ute or van to a light-duty truck even easier,” said Mr Petrovski.

“Hino continues to be the only Japanese truck manufacturer to offer the advantage of a true automatic transmission across the light-duty 4×2 model range.

“The range of applications and industries suitable for the car-licenced 300 Series range is enormously broad and varied, and feedback from our customers highlights the importance of the automatic transmission in aiding drivability for a broad cross section of users.

“No matter the intended use, be it for tradespeople, delivery drivers or local councils, the 300 Series truly stacks up as a competitive package.

“One of the advantages of the 300 Series is the array of options available in our Built to Go (BTG) range, with high quality, cost-effective drive away solutions for light-duty truck buyers who require versatility, combined with a Hino Genuine body tray.

“Over 50 percent of 300 Series models sold are registered at 4.5 tonne Gross Vehicle Mass (GVM) which allows the vehicle to be operated on a passenger car-licence.

“The high demand for car-licenced light-duty trucks is expected to continue to rise, fuelled partly by the increase in e-commerce and the forecasted long term shortage of truck-licenced drivers.”

The foundation of the Hino safety specification is Vehicle Stability Control (VSC), which has been a feature of the 300 Series for nearly a decade.

“The addition of Hino SmartSafe in the new 300 Series will reaffirm its position as the safest Japanese light-duty truck in Australia,” said Mr Petrovski.

PCS can detect a potential collision with another vehicle, and/or a pedestrian using radar technology and image sensors.

“If the system detects the possibility of a collision, it will warn the driver to apply the brakes using both visual and audible alerts,” said Mr Petrovski.

If the system determines that a collision is imminent, it can autonomously apply the brakes to minimise the damage or even avoid the collision.

“Since its introduction as standard fitment on our medium-duty 500 Series Standard Cab models in early 2019, our customers have embraced PCS as an active safety system and have been requesting its introduction across other Hino models.”

Meanwhile, the Lane Departure Warning System (LDWS) similarly alerts the driver visually and audibly if the truck is deviating from its lane without the turn indicators being engaged.

Daytime Running Lamps (DRLs) along with the PCS radar in the bumper and an updated grille help to distinguish the new 300 Series from its predecessor.

“The DRLs are a unique feature for Hino in the light-duty truck segment – they ensure that if headlamps are not turned on in low light conditions, the vehicle will be still seen, adding to the overall safety of the vehicle.”

The 300 Series Cab has been tested to the UN ECE R-29 cab strength certification and features narrow A-pillars which ensure a nearly uninterrupted forward view.

Forward vision is complemented by the heated and electrically operated flat main mirrors, and the convex spotter mirrors which offer vision to the side and behind the vehicle.

“When combined with the high definition waterproof and infrared Reverse Camera, the new 300 Series offers near 360-degree vision for improved safety when manoeuvring the vehicle.”