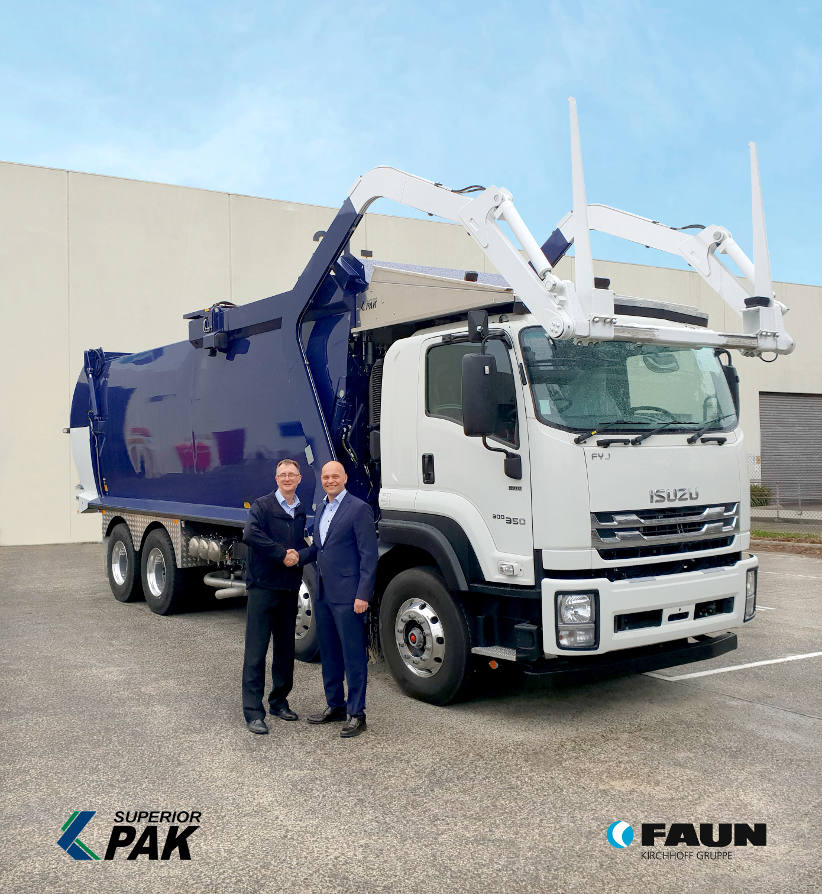 With a history dating back to its foundation in 1845, FAUN produced its first “dust cart” especially for collecting rubbish in 1897. Production of refuse collection vehicles and sweepers commenced in 1908 with the name FAUN established in 1916.

FAUN became a division of the KIRCHHOFF Group in 1994 and is today highly regarded for its expertise in manufacturing, selling, renting and leasing waste disposal vehicles and sweepers worldwide, and for its development of fuel cell and electric drive options which are state of the art.

Superior Pak is the leading Australian manufacturer of waste collection and compaction equipment and works with vehicle suppliers such as IVECO, Dennis Eagle, Mercedes-Benz, Scania, Isuzu Trucks, Hino, Fuso, Volvo and DAF. The company head office is based in Brisbane, with its manufacturing centre based in Bundaberg, Queensland.

Patrick Hermanspann, CEO FAUN Group, comments: “We are very pleased to welcome Superior Pak in our Group. It is an honour for us to work closely together and to strengthen our business. All parties can learn from each other and we provide our customers with the best trucks and after sales services.”

Commenting on the new shareholding arrangements, which will take effect from the start of September, Rob Wrigley, Superior Pak managing director said the move will provide further depth to the company’s business and product range.

“New technologies for vehicle drive systems combined with the expertise of both partners in the production of class leading waste disposal and collection equipment will reinforce the strong future ahead for Australian manufacturing and the abilities of our workforce,” Mr. Wrigley added.