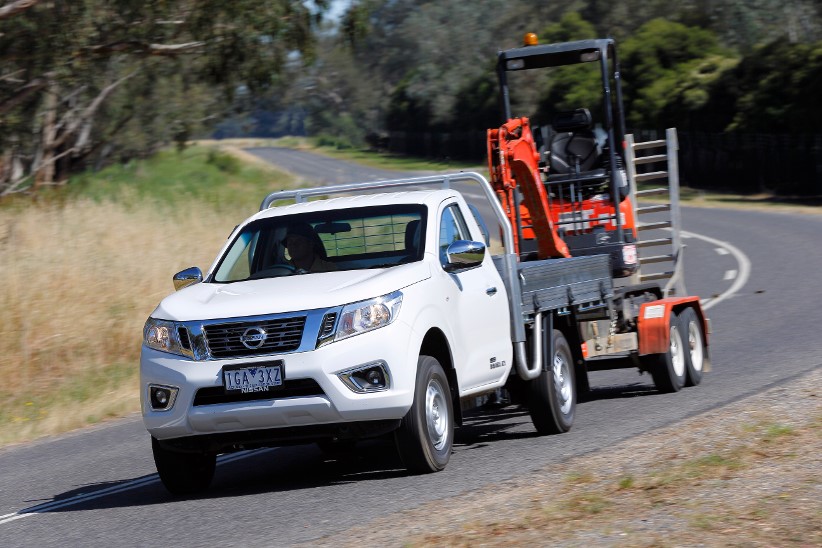 In mid 2015 Nissan released their all new Nissan NP300 Navara in the dual cab body style. It came with independent rear suspension which was aimed at the light duty fleet and recreational novated market. The new drivetrain options, on road dynamics and SUV like interior of the dual cab set new standards for the ute segment.

Later in the year Nissan released a further 13 variants of the NP300 Navara. Fleet Auto News took the chance to join Nissan and some other motoring publications in Albury to test drive these heavy duty variants on country roads, forestry trails and a demanding 4wd handling circuit.

The additional models now include single cab with cab chassis, a king cab with either cab chassis or pickup and a dual cab with cab chassis. Recognising that the limited range in previous models hampered Navara sales, the full NP300 Navara range now runs to 27 variants with a very clear aim of satisfying all the needs of fleet operators.

The 2.5L (122kW/238Nm) petrol engine is only available in the single cab chassis range.  Whilst this provides a strongly priced entry point with an MSRP (before adding a tray) sneaking below $20,000, we found this engine worked very hard to get moving and would expect drivers will grow tired of rowing through the gearbox at the first sign of any hill.

The diesel engine options (both 2.3L) are considerably stronger with the single turbo version working with 403Nm and the twin turbo delivering 450Nm.  This big step up in torque is noticeable straight away and delivers effortless acceleration even when carrying a decent payload. In ST and ST-X trims an impressive seven speed auto transmission option is available.

On road dynamics for these vehicles was somewhat as to be expected for a leaf spring set up. On highway the ride was a little jittery with exciting reactions to mid corner bumps.  Surprisingly, once we were on rough forest roads the Navara seemed to handle more predictably and was particularly unfussed by corrugations.

Even more impressive was the manner in which these vehicles navigated the tough 4WD handling circuit.  The short leaf spring set up allowed for very good approach angles and significant water, log, and mogul obstacles were easily managed.

Nissan has paid attention to the needs of the modern ute driver with all variants including Bluetooth hands free telephone operation and audio streaming, three power sockets and an extensively adjustable driver’s seat.

Sales of high riding 4×4 pickups have been growing impressively and there is now exceptionally strong competition in this sector.  The Nissan NP300 Navara is well placed to face this competition. Now with a completed range, the  Navara, more than ever, should be considered against the usual tier one options.