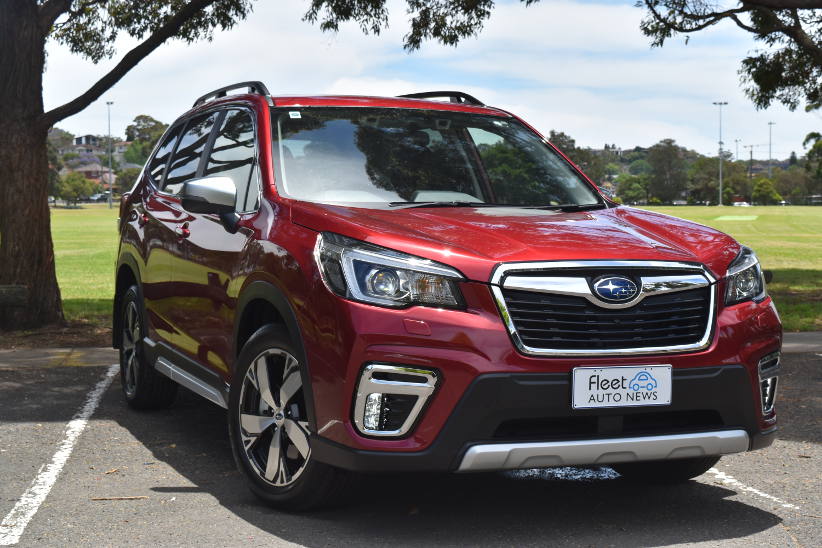 Forester now has many serious rivals in the mid-sized SUV market, competing in the $40K – $50K price band. Mazda CX5, Hyundai Tucson, Ford Escape, Toyota RAV 4 and KIA Sportage along with many others, offer compelling propositions to get you to throw your hard earnt their way. But as always this fifth generation Suby stands tall and delivers what it promises, nothing more, nothing less.

I was pleased to drive both the ‘entry level’ 2.5i Forester as well as the ‘top of the line’ 2.5i-S, so was able to experience Forester from both ends of the spectrum.

Forester 2.5i – Everything but leather seats

The first thing that struck me about Forester is the interior space, for a mid-sized SUV it’s huge inside with excellent head, shoulder and leg room for all occupants. Head room is so plentiful, if you were inclined you may even be able to wear a “Top Hat” whilst driving – well maybe. Space doesn’t end there though with plenty of cargo space for your stuff as well, 498 litres with the rear seat up and 1,768 litres with the 60/40 folding rear seats down.

There’s nothing ‘entry level’ about the 2.5i. It would have to be one of the best equipped ‘base models’ around. The safety and tech features included on 2.5i are outstanding. As part of Subaru’s Eyesight and Vision Assist systems, Forester 2.5i is equipped with:-

A 6.5” touchscreen is provided and doubles as the display for the reversing camera. A six speaker stereo complete with DAB radio and a single CD slot will keep the tunes playing, as will Bluetooth connectivity and Apple Car Play/Android Auto. Two 12V outlets are provided in the front as well as one in the boot. A USB port in are available for both front and rear seat passengers. Smart key/push button start and dual zone climate control further dispel the base model tag of the 2.5i.

Forester 2.5i quite an attractive looking vehicle with 17” alloy wheels (225/60R17 Bridgestone tyres and a full size spare) and styling updates mean there is nothing base or entry level about it. The new instrument cluster and dashboard displays bring it into line with other models in the Subaru range.

A 2.5 litre four cylinder horizontally opposed boxer petrol engine (136kW/239Nm) is the only option across the Forester range with a seven speed Lineartronic CVT transmission (with paddle shifters) coupled to the symmetrical all-wheel drive system. Subaru’s ‘X-mode’ is now standard across the Forester range and helps with Hill descent control and traction/grip improvements when the going gets a bit rough.

Driving 2.5i, is comfortable, reliable and easy to live with every-day. It offers good fuel economy with Subaru listing it at 7.4lt/100km (combined). I liked the engine Auto Stop/Start system and the constant updating of the display telling ‘I’ve almost saved a coke can’s worth of fuel’, but at times the re-start was so rough that I thought the motor was trying to leap out from under the bonnet.

The versatility and practicality of Forester 2.5i with its raised ground clearance (220mm) and off road ability, would suit many fleet applications as well as individuals seeking a capable vehicle to tailor into their lifestyle.

At the other end of the scale the 2.5i-S is the ‘top of the line’, with all the luxury one could wish for. Mechanically the same as the 2.5i (and all other Foresters in the range for that matter) with 2.5 litre (Auto stop/start) engine, seven speed CVT and all-wheel drive system, 2.5i-S brings the little extra touches that make the car just that little bit nicer to be in. when it’s a novated lease. Mmmm. 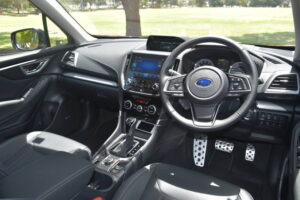 To start with there’s leather seats all round, eight way electric adjustability for driver and front seat passenger with memory functions. But strangely, no seat warmers, as found on other Subaru models. The infotainment system is upgraded to an 8” screen and there are additional cameras added to give you better vision of the car when parking. The stereo is an eight speaker Harman Kardon system with sub-woofer and amplifier.

On the outside, the mirrors are auto folding and heated, plus 18” alloys with 225/55R18 Bridgestone tyres, extra chrome trims, LED DRL’s and a sunroof.

The X mode drive system gets a second setting to cope with deep snow and sand and Subaru’s Si intelligent drive system features as well, giving the choice of Intelligent and Sport mode to tailor your drive experience.

Forester 2.5i-S, is a very comfortable drive and would be well suited as a novated lease option if you are looking for a premium mid-sized SUV.

This data is from the 2019 Novated Leasing Guide produced by Fleet Auto News.