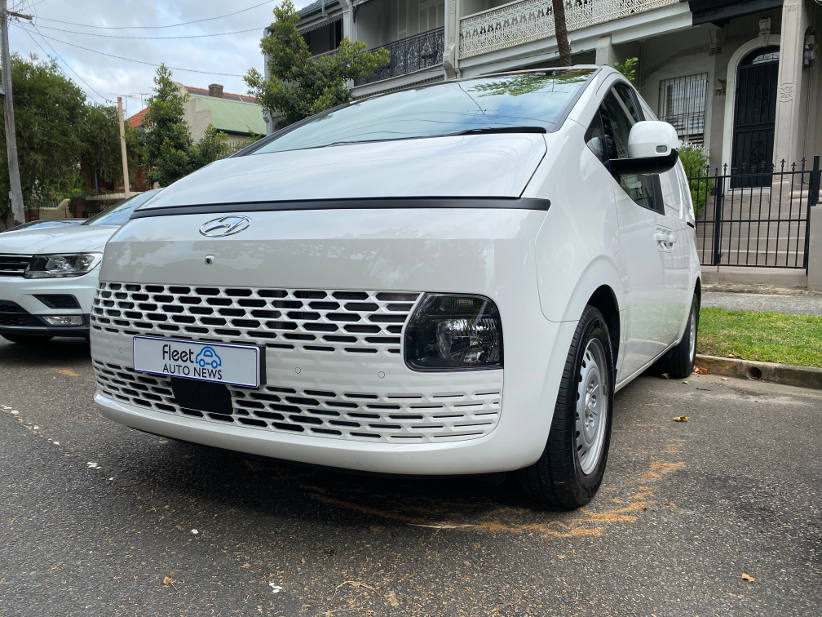 Posted By: The Fan Teamon: May 09, 2022In: New Vehicles, Car Reviews
Print Email

Ok, this feels like a setup. My editor at FAN has asked me to review the Hyundai Staria Load. Apparently it’s part of my career development to understand the nuances of white vans and convey the benefits to our audiences using my experience of receiving online shopping parcels.

So how do I channel my inner delivery driver? Let’s start with some shopping. If I buy the parcels, then I can deliver them to my home. Isn’t that the job?

It’s a small hop into the seat which would not be an issue for fit young squire but does require some coordination with heels and a skirt. The layout of the dash is stylish and useable at the same time. Immediately in front of the driver, between the steering wheel and instrument cluster, is a shelf; for paperwork I guess? And above the driver’s head in the roof lining, is another storage compartment. There’s also plenty of spots in the large doors to stuff the tools of your trade.

I had to use a flip key again which regular readers will know that I loathe. Impossible to find in a handbag. The car should know I’m standing next to it, or in it, and just obey. There was also a gear shift lever instead of the push button shifters found in the people mover version of the Staria.

The centre infotainment screen is big and easy to read. The dials and buttons are practical and help you navigate the functions without needing to read the manual (which is not the case with all new cars in 2022). On the steering wheel are there are controls that do the same thing which is required because my petite frame couldn’t reach the touch screen without an uncomfortable stretch. 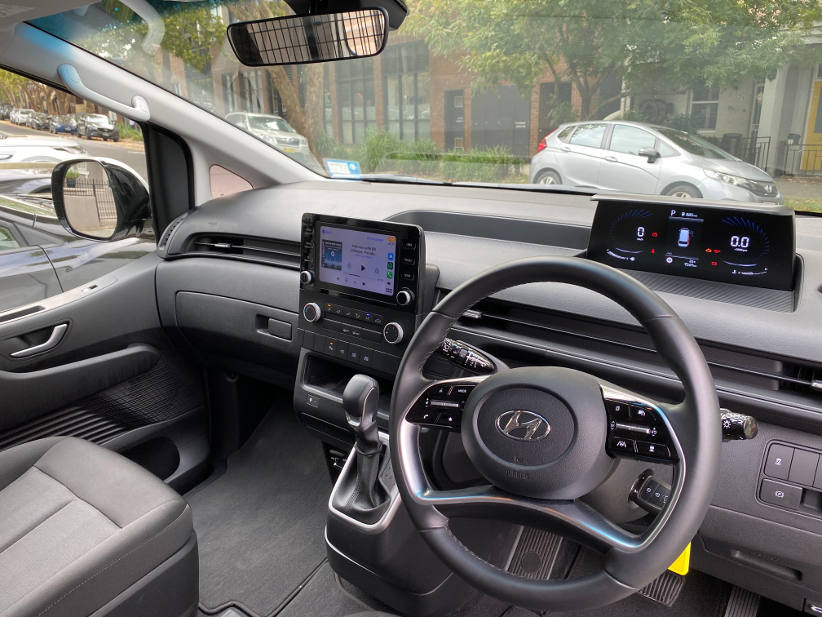 Once I got to the shopping centre I panicked; how tall is this van? I wasn’t naïve enough to think that ducking my head would change the height of the Staria Load. Maybe I should have used valet? Not to fear, it’s only two metres tall so there was no scrapping of the roof when I forged into the self parking zone.

Then came my second round of vanxiety. How do I park it without any rear windows? With a 360 degree Surround View Monitor of course. With a driving position like a passenger car I was starting to like this van.

What else would be important to me if I was a delivery driver? Wireless CarPlay and phone charging? Staria Load has it.

I was also pleased to know that I (and the other road users) would be safe in the Staria Load. According to ANCAP, it has set a new benchmark in safety by performing well in all areas in the Commercial Van Safety Comparison (which is different to crash testing) and earning the first PLATINUM level of crash avoidance.

All the safety features I love in the other, more luxurious, Hyundai models I normally drive are the same in the Staria Load. The Hyundai SmartSense features work the same way which is a significant change for this vehicle category which ignored driver, passenger and pedestrian safety for as long as it could.

The outgoing iLoad was launched so long ago that Motorola flip phones were still fashionable. However the utilitarian nature of vans means the model cycle get dragged out until fleet customers demand a better product. European vans and the segment leading Hiace have all improved their safety credentials in recent years, however this van feels like Hyundai have leapt ahead again. 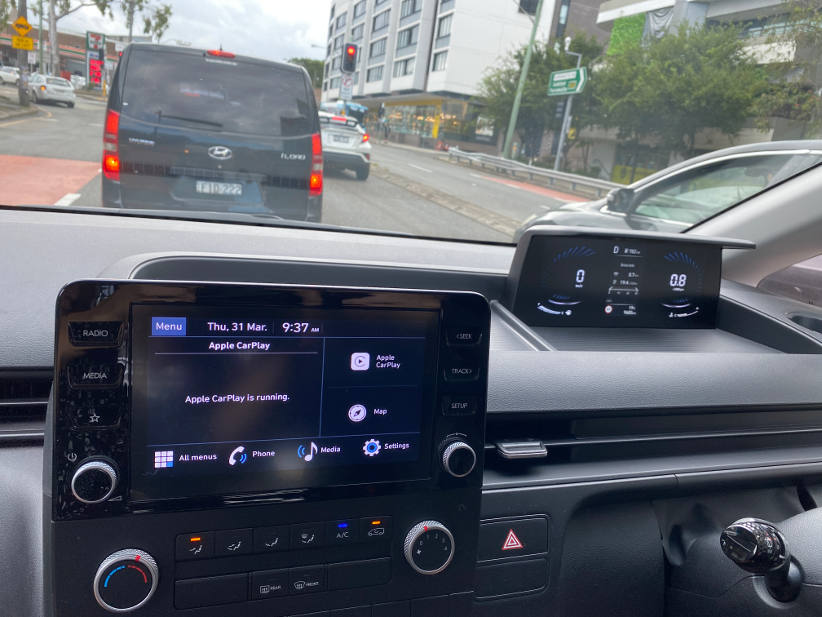 Following the old iLoad in a new Staria Load

Like all new vehicles that come with better safety technology, lower emissions and improved performance, the second hand market will benefit once the used fleet cars flow through the auction houses. With vans and other commercial vehicles the impact is more immediate because buyers are small businesses and sole traders that are on the road everyday.

I’ve now driven the Staria Load and the Staria people mover. Both practical, safe and designed for a purpose – one to carry goods and the other to carry people. Hopefully my editor now considers me fully trained.

P.S. We heard a rumour in the FAN office that the lovely styling causes some operational issues for certain fleet customers. The rear window spoiler tilts up and interferes with ladder racks. Not a problem for most customers, however a major issue for utility companies with large fleets and they buy a lot of vans.

P.P.S. A reader has written to FAN and advised that there is an option of Twin Swing doors that will eliminate the issue of the spoiler hitting the ladder racks. 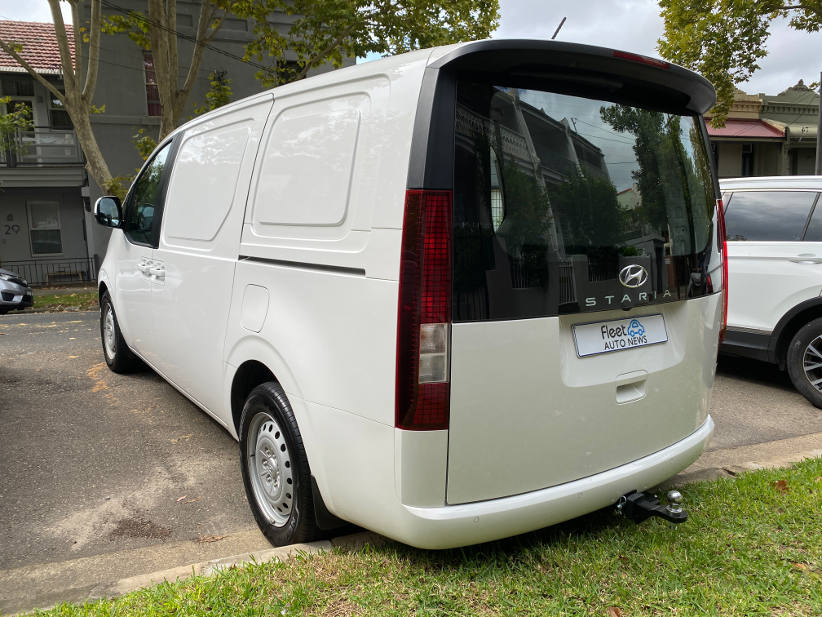