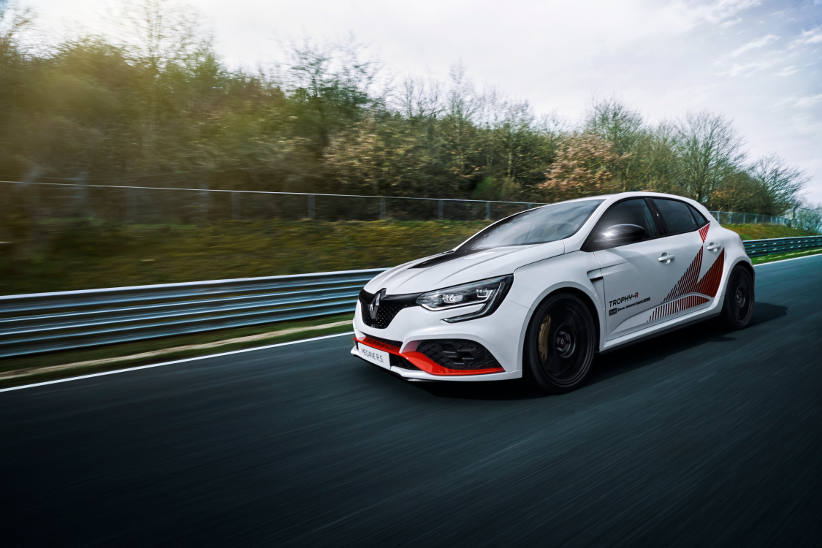 Most powerful Megane ever available to buy online

The new limited edition Renault MEGANE R.S. TROPHY-R (perfect for a novated lease), the most high performance production car Renault has ever put on the market, and due to arrive in Australia in early 2020 will be available for Australian purchase (secured by deposit) through a brand new online purchasing platform in July.

The ultimate track car, the Megane R.S. Trophy-R will come exclusively with the 6-speed Manual gearbox and in one colour – pearl white with red headlights.

Driven by the very limited volume for the super-hot hatch, the online sales portal is the first of its kind for the French manufacturer in Australia and will open with an exclusive pre-sale for registered customers.

The Megane R.S. Trophy-R is rooted in Renault’s immense history in motorsport, and perpetuates the legend of the record-breaking Megane R.S., once more bringing to the roads the technologies and know-how Renault Sport has developed on the racetrack. For this car, Renault Sport engineers have pushed their expertise further than ever before. The outcome was validated by a new FWD record on the Nürburgring in the Megane R.S. Trophy-R Record breaking car.

“The strong customer interest in the Megane R.S. Trophy-R is testament to the place this Renault Sport prepared vehicle has within the Renault family and in the hearts of car enthusiasts across Australia,” Anouk Poelmann, Managing Director Renault Australia said.

“It is important that every Australian, regardless of their location, is given the opportunity to be part of the exclusive Megane R.S. Trophy-R club and it is for this reason we have made the decision to bring the car to market in this new and exciting way for Renault Australia.”

“I encourage anyone interested in purchasing a Megane R.S. Trophy-R to register their interest via www.renault.com.au this weekend to ensure they have access to the pre-sale on Monday morning,” Poelmann continued.

The new MEGANE R.S. TROPHY-R has the same exceptionally efficient 1.8 L 300 bhp engine as the Trophy version (167 bhp/l). So the Renault Sport wizards did not focus on power to enhance performance, they looked elsewhere in three main spheres of development:

This expert work has been validated by the stopwatch: a new absolute record for a front-wheel drive production car was achieved on 5th April 2019 by the New MEGANE R.S. TROPHY-R Record version on the 20.6 km of the Nordschleife at the Nürburgring in 07:40.100. It also clocked up a reference time of 07:45.389 on the official full lap of the circuit. This is an extreme performance bearing in mind the margin of progress is increasingly narrow at such a level.