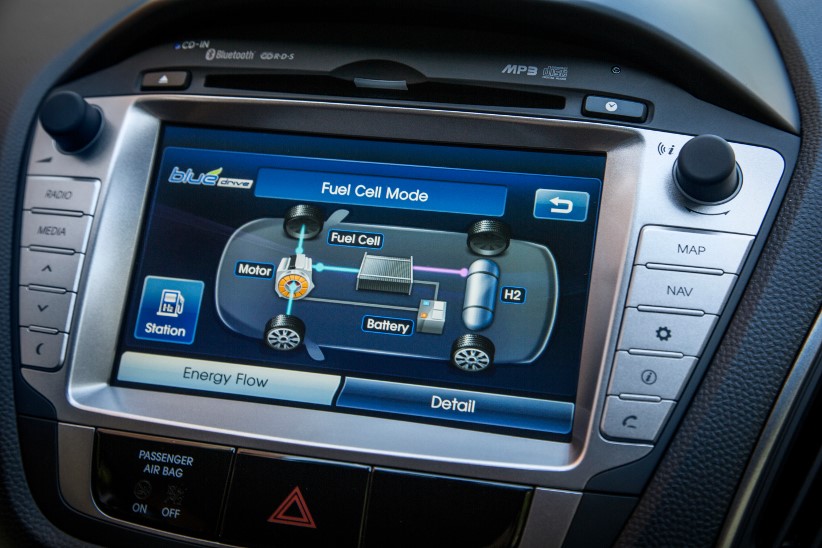 Q: How does the ix35 Fuel Cell work?
A: It is essentially an electric car, with the electricity supplied by a fuel cell stack. The clever part happens inside the fuel cell itself – in simple terms, hydrogen from the fuel tank is combined with air and passed through a membrane, which creates the electricity used to power the car’s electric motor.

Q: Is the hydrogen fuel in the vehicle dangerous?
A: The ix35 Fuel Cell is designed to meet the strictest global vehicle safety standards, like all the safest cars do – over 30 of the vehicles have been crash-tested to verify its level of safety. It has passed the North American NHTSA test, one of the world’s toughest.

Many Hyundai ix35 Fuel Cell vehicles are now operational on public roads around the world, including California and countries throughout Europe. That is testament to their safety.

The car’s hydrogen tanks are constructed with steel and carbon composite wrap, enough to contain the gas at a maximum operating pressure of 700bar (10,000psi). The hydrogen tanks have had bullets fired at them, have been put into fire baths and subjected to other extreme tests like drop test, burst pressure and crash tests to verify their strength – fuel pressure is greatly reduced before it enters the vehicle’s fuel cell stack.

In short, the ix35 Fuel Cell is an extremely safe car.

It is also worth noting that Australia is quite advanced with the use of other gaseous fuels like LPG and CNG, so hydrogen gas technology – more advanced than LPG – should represent no great challenge for Australia in safety terms.

Q: What is the specification of Australia’s first Fuel Cell vehicle?
A: It is a left-hand-drive, European-specification ix35 Fuel Cell. This model is currently not made in right hand drive.

Q: What is it like to drive?
A: Surprisingly quick – it develops maximum torque at zero revs and accelerates more rapidly than you’d expect. Some members of the Australian media drove this version of the ix35 Fuel Cell recently at Hyundai’s Namyang proving ground and during a 1000km hydrogen Highway drive in Germany. They were  surprised by how ‘natural’ the car is to drive. Its drivetrain is almost silent, the same as any electric car.

Q: How fast is it?
A: The ix35 Fuel Cell accelerates from 0-100kmh in 12.5 seconds and its maximum speed is 160kmh. It is no racing car, but it’s certainly not slow. It’s like a normal car in most ways, but it is an electric vehicle so it makes no engine noise and has no gearbox.

Q: How long will it take to refuel?
A: With an advanced full-size 700bar (10,000PSI) refueller, like those used in Europe and America, fill time is about three to five minutes, the same as a normal petrol or diesel car.

The refueller we have installed at HMCA is a small 350bar (5,000PSI) compressor. Fill time is five minutes.

Q: What is the specification of HMCA’s hydrogen refueller?
A:It is a 350bar refueller made by Air Products and Chemicals, Inc. of Allentown, Pennsylvania.

We can provide full details of the unit if required. Note that refueling at 350bar instead of 700bar will mean our vehicle will have a range of approximately 300km – ample to demonstrate its capabilities.

Q: Does the refueller generate its own hydrogen?
A: Not yet. Initially it will use compressed hydrogen supplied by Coregas Australia in bottled form.

The hydrogen is made by natural gas reformation at Port Kembla NSW.

HMCA is planning to install an electrolyser unit next to the refueller to make hydrogen on-site, using water extracted from the atmosphere combined with solar power that has been installed on the roof of our building.

We will reveal details of this unit in good time. Meanwhile, the Air Products machine combined with Coregas-supplied hydrogen serves our purposes well.

Q: Why are you doing this? What is the long-term plan?
A:Although we are fascinated by the potential of a large-scale hydrogen transport network in Australia, we are – first and foremost – a vehicle manufacturer and an advocate of the technology.

We were first to mass-produce a hydrogen car and we will remain at the forefront of this technology. However, it is up to governments and other interested parties to plan and construct a hydrogen transport infrastructure for the future.

We at Hyundai think there is great potential for the future with hydrogen in Australia, but we cannot fund or plan infrastructure on our own. Overseas examples would seem to show the benefits clearly, and, as in other parts of the world, Hyundai will assist with partnerships in every way possible.

Over the past two years, we at Hyundai Australia have spoken with just about every major hydrogen infrastructure manufacturer in the world and studied hydrogen projects in California, Germany, the UK and Scandinavia.

In October last year we attended hydrogen infrastructure project meetings in Paris to learn how cooperative projects operate with the support of Governments, car makers and infrastructure manufacturers.

Could a ‘Hume by Hydrogen’ highway be built by 2020? Of course. The potential is there for hydrogen highways and for even more ambitious plans to power remote communities using solar and hydrogen technology – such schemes could include completely emissions-free transport built in, with the capability to use hydrogen to store energy for when it’s most needed.

Over the past two years, discussions have been held with global infrastructure manufacturers, with one even showing interest in manufacturing the hydrogen stations in Australia – a great way to create engineering and manufacturing jobs here.

Hyundai Motor Company Australia is committed to hydrogen technology, but it will only work if vehicle and infrastructure manufacturers work together with businesses and Governments to start planning for a greener future today.