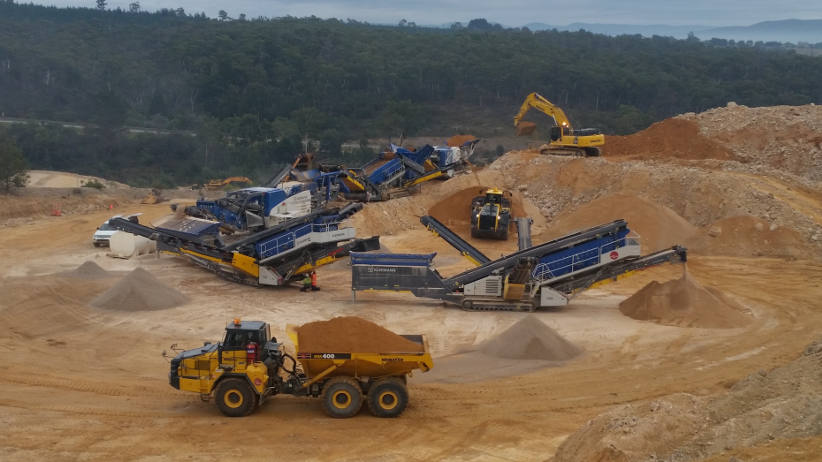 Posted By: Marcon: November 13, 2019In: Plant and Equipment
Print Email

A quarry owned mainly by local shareholders and staffed almost exclusively by nearby townspeople is bringing pride and productivity to Wallerawang in near central New South Wales.

In less than two years, Walker Quarries has lifted from an 80,000 tonne a year operation of quartzite capture, to more than 200,000 tonnes, climbing towards its licensed capacity of half a million tonnes.

The local success story began as a greenfield site only five years ago but its real development has occurred in the last two with a policy which has achieved the delicate balance between investment and profitability and created a workplace culture which has minimised staff turnover and contributed to the local community.

Until recently, Walker Quarries, named for nearby Mount Walker in the recently gazetted Marrangaroo National Park, was a discrete operation behind a non-descript fence on the Great Western Highway just-out of Lithgow, on the road to Bathurst.

Then signs were erected, and the entrance opened up, reflecting local pride. Its 16 staff are all from nearby towns and the quarry has adopted a policy of dealing with selected partners with local service capability. The quarry has only two major external partners, both of which are proudly displayed on the signs at the front gate.

One is the provider of its crushing equipment; the other is its machinery supplier, Komatsu. Both are mutually exclusive on site. All off-site transportation is secured from contractors ‘to keep it simple’.

The mix of WA 500 / 480-wheel loaders, PC 450 excavators and HM 400 dump truck, have been brought on strength progressively as the quarry’s potential has ramped up.

Only one each of the wheel loaders and excavators have been new, their purchase justified by future planning for the site which has revealed a 30-year resource potential.

“We get exceptional service on all our machinery and with a premium used late model fleet there is no need to be concerned about lost productivity (through breakdown),” quarry manager Trevor Hoffmann said.

The provision of a premium power train warranty on its used machinery provides additional certainty.

Walker’s board of five principal directors, two from Sydney and three from the district representing local small investors, is soon to determine future policy for machinery turnover and it will be influenced to a large degree by the conditions which have been created in the quarry.

Since Hoffmann’s appointment in July 2017, Walker has built ‘good hard roads’ in the quarry to minimise tyre wear and machinery degradation.

The access roads, which provide positive implications for machine life, are one example of a regime the experienced civil contractor and quarry manager has helped bring to the site to contain unnecessary cost and ramp up productivity.

Walker and Komatsu have jointly developed a service and training regime to optimise the use of the machinery. The two companies share machine-service duties, in each case to factory standards, with Komatsu experts brought in when required.

The operator skills of Walker personnel have been maximised by on-site training from Komatsu specialists.

“I tell my operators: leave your bad habits at the front gate,” Hoffmann said. “But I’m always open to a good idea from them.”

Walker is integrating KOMTRAX, Komatsu’s on-machine remote-monitoring diagnostic service, onto all its machines and Hoffmann is using it to further motivate his operators. According to Hoffmann, employee turnover at Walker is particularly low, the result of a team-building culture which has been at the core of the quarry’s development.

“I enjoy teaching other people,” he said.

Hoffmann’s rounded experience – as a successful civil contractor on major roadworks and infrastructure, and now in at least four quarries – has provided Walker with a strong opportunity to develop its own extraction process and meet the needs of its clients.

“It’s given me an appreciation of the needs of both and how we can work as a team,” he said.