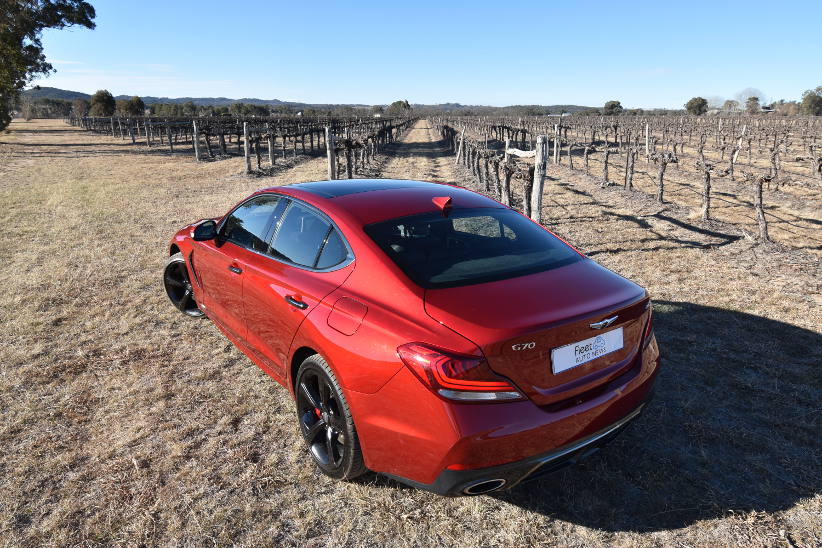 What’s in a badge? To many it’s the most important thing in the world, adding style and prestige to their vehicle. But what is style without substance? Well, the Genesis G70 brings both with stunning looks, performance and a customer ownership package that will have you thinking twice before signing up for a European marque.

“Is it an Aston Martin?”, is the question I was asked regularly when stopped in the street by passers-by. It’s beautifully proportioned body, aggressive styling and stance and the ‘winged’ Genesis badge certainly led many to that assumption. When I explained that the car was in a fact a Genesis (Hyundai’s luxury brand), the fascination with the car increased.

The G70 3.3T is equipped with the same motor that’s in the Kia Stinger GT, a 3.3 litre twin turbo V6 (272kW/510Nm) coupled with an eight speed auto, it’s nothing short of mind blowing. A friend of mine, remarked when we took it on a trip to country NSW, that “overtaking in this car is like being strapped to a rocket ship”. With a claimed 0-100 km/h time of 4.7 seconds, it’s like bringing a gun to a knife fight when compared to some of its German and Japanese rivals in the $70K – $80K band.

Equipped with Brembo brakes, five drive modes (Smart, Eco, Comfort, Sport & Custom) and staggered fitment tyres on 19” alloys (225/40R19 front 255/35R19 rear), the G70 is a phenomenal drive. It’s exciting and exhilarating, with razor sharp handling and responsiveness when you push harder on your favourite twisty road. Yet still a comfortable highway cruiser with power to burn, as it laps up the kilometres on a weekend getaway. City or country it’s an exceptional daily driver that’s very easy to live with.

Genesis lists fuel economy for the twin turbo V6 at 10lt/100km combined and 7.5lt/100km highway. Though I saw an average of 8.0lt/100km on my country trip, which I thought rather good, especially as I wasn’t using ‘Eco’ mode!

Inside the G70, the feel is pure luxury. Quilted leather seats all round, heated/ventilated in front. Dual zone climate and premium 15 speaker Lexicon sound system with an eight inch tablet style display, controlling the infotainment functions. Apple Car Play/Android Auto and wireless charging for your phone is provided along with a 12V outlet and USB ports front and rear.

Rear seat occupants may lament a lack of leg room, but overall inside the G70 is a very comfortable place. Boot space is limited at 330lt (smallest in class) meaning only a temporary spare can be accommodated.

Safety features on G70 are numerous:-

Looking to something different for your novated next lease? Genesis G70 3.3T is priced from $72,450 (plus on-road costs) offers a whole lot of bang for your buck. It’s not an Aston, nor does it try to be, it’s an astonishing premium mid-sized performance sedan, that got the looks and style to compete with any ”badge”.