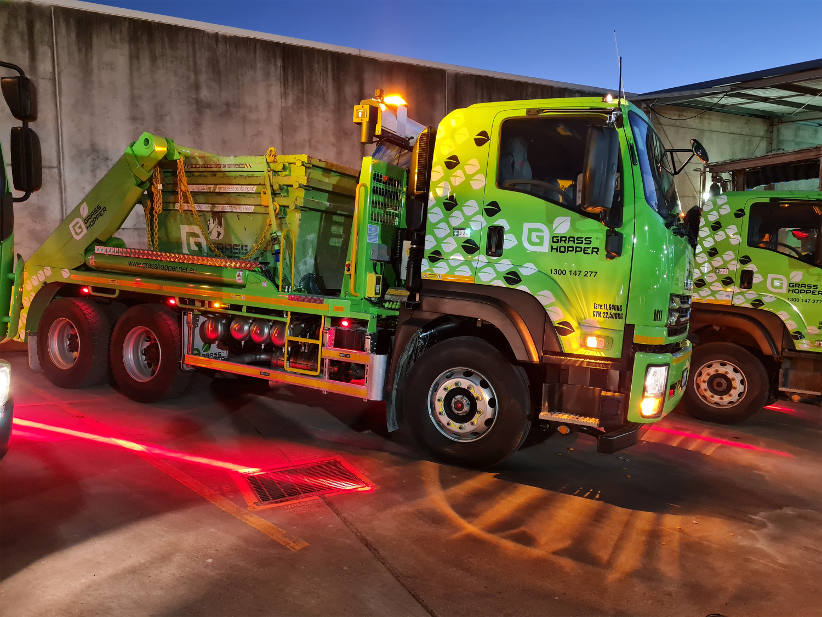 Grasshopper Environmental makes leap in safety with its fleet

The livery of the Grasshopper Environmental fleet is green and white — the letter G on a leaf and another leaf with a blade of grass. It’s emblematic of the clean, green standards of the 30-year-old waste management group operating in Sydney and the Blue Mountains. It’s also a mark that has increasingly aligned itself with the highest sustainability and safety measures.

Indeed the signage itself is part of the thoughtfulness for safety that has crept into every aspect of the Grasshopper fleet. It was upgraded a few years ago with reflective markings, significantly amplifying the vehicle’s visibility in low light conditions.

“Our growth in safety practices over the past four years has gone from a reaction-based approach to our approach to safety today — that is formed through investigation, collaboration, feedback and learning through industry data on incidents in both waste transportation and general transport,” said Ryan Noble, Grasshopper’s fleet manager.

Noble was among three of the company’s executives to present a webinar: Safety, Sustainability and Productivity — Triple Treat Drives Business Success. The online talk was hosted by the National Road Safety Partnership Program’s Jerome Carslake. They outlined their journey that has resulted in a significant drop in safety incidents. It includes driver selection, driver training, recognition of the important role of drivers in the business, and empowering drivers with business and safety decisions.

Safety is at the heart of everything at Grasshopper. The presenters acknowledged data from Safe Work Australia showing 43 percent of worker fatalities and injuries were caused by vehicle collisions; that drivers and machinery operators are occupations with the highest recorded fatalities, and that when looking at worker fatalities by industry the transport industry had the second highest.

Other data from the UK Health and Safety Commission was also noted. It showed that by taking positive steps to preventing accidents and ill health, absenteeism was greatly reduced, productivity improved, significant sums of money was saved through better maintenance, compensation claims and insurance costs were cut, client and supplier relationships were improved, employees were happier, and worker retention was improved.

Noble said that in 2018, business growth required an expansion in the fleet, which also gave an opportunity to improve. They added two FE Volvos with safety features including front under-run systems, daytime running lights and emergency braking. They also introduced four-way cameras, which were able to cover known blind spots in heavy vehicles. Grasshopper then went on to engage Accuweigh to supply fit and maintain board scales to better manage mass limits.

“With the purchase of new fleet vehicles also came the realisation of the complexity required to maintain these vehicles,” said Noble. He added they worked with the range of truck suppliers — Volvo, Scania and Isuzu — to set each vehicle up with service and maintenance plans.

“This has led to very minimal downtime on the Grasshopper fleet and the security of knowing there is no guess work when it comes to repairs.”

In 2019, Grasshopper entered works with Sydney Metro for the upgrade of Central Station, which propelled Grasshopper into making further improvements in its safety protocols and in its fleet.

Sydney Metro, recognising that the works involved transport of tonnes of excavated spoil and construction materials, introduced standards for suppliers to minimise road safety risks. These included blind spot elimination through mirrors and/or camera systems, enhanced vehicle markings, and vehicle monitoring systems. Another standard that suppliers like Grasshopper had to meet was that all heavy vehicle drivers working across the project’s multiple sites complete competencies in a low-risk driver training program.

In 2020, the need to grow the fleet again saw Grasshopper add a Scania P450, an upgrade from the P440, with additional safety features such as AEB (advanced emergency brake) LDW (lane departure warning) and ESP (electronic stability control).

“The additional technology on our fleet also presented further opportunity to work within Sydney’s new tunnel construction works,” said Noble, proving the critical role of fleet to a business.

In 2021, Grasshopper got Gotcha Products to implement their Patronus Safety system, a technology used in the mining and warehousing industry to visually establish safe distance for vehicles to operate in low light environments.

Noble said that while the enhanced technologies and systems introduced into the fleet had played a critical role in the safety and business improvements at Grasshopper, it could not happen without a concerted effort to build the appropriate culture among staff and drivers.

“The technology is only there to enhance and assist in making the right decision. Ultimately technology/advancements in safety systems have the potential to become void if not accompanied with cultural behaviour, management and ongoing monitoring and review.”

Carslake said later in a chat outside the webinar of Grasshopper: “They’re a small company growing through this approach which is awesome. They are beating the big guys through this model.”