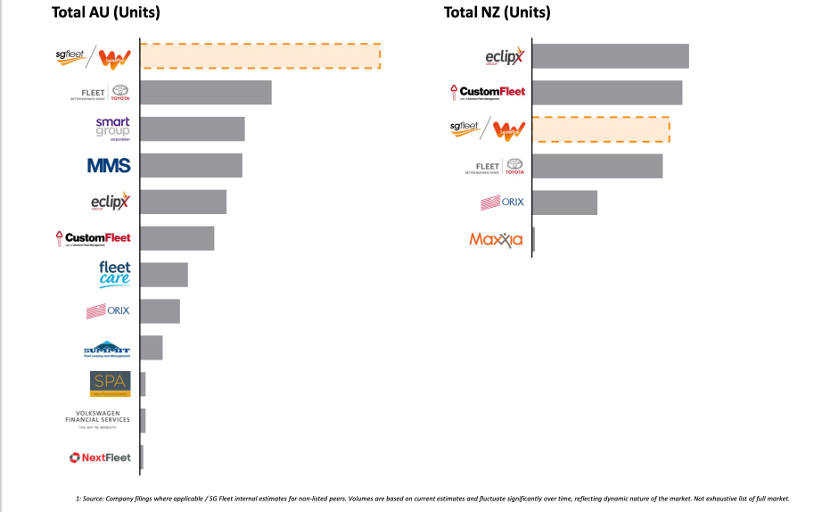 Who is the biggest fleet leasing company in Australia?

The recent announcement that SG Fleet will buy the Australian and New Zealand arm of global fleet leasing company Leaseplan has provided some data on the size of local fleet management, leasing and novated providers. Obviously SG Fleet will be the largest once combined with Leaseplan; but who is second?

In the documents supplied by SG Fleet to support the purchase decision they included a graph that placed Toyota Fleet Management as second largest in Australia using their internal estimates.

On the Custom Fleet website they claim 100,000 vehicles under management in Australia and New Zealand. In the annual reports of parent company Element Fleet Management they estimate 15% market share.

The top 10 leasing companies seem obvious though without any transparent industry reporting it’s hard to know the actual ranking of each fleet management organisation outside of the listed entities.

Here’s the Fleet Auto News 2021 estimate of the top 10 (based on fleet size) novated leasing and fleet management organisations before the SG Fleet announcement;

Genesis Motors Australia has opened its second flagship Studio, at the Emporium Melbourne (shopping centre) in the heart of Melbourne’s vibrant CBD. I... Read more

When Subaru launched the Forester it created a new aspirational class of vehicle that demanded owners do more with their weekends. That’s what w... Read more

We loved it at first sight, but it took two weeks to like it. There are several quirky things about the Mazda CX-8 that make it different and great at... Read more