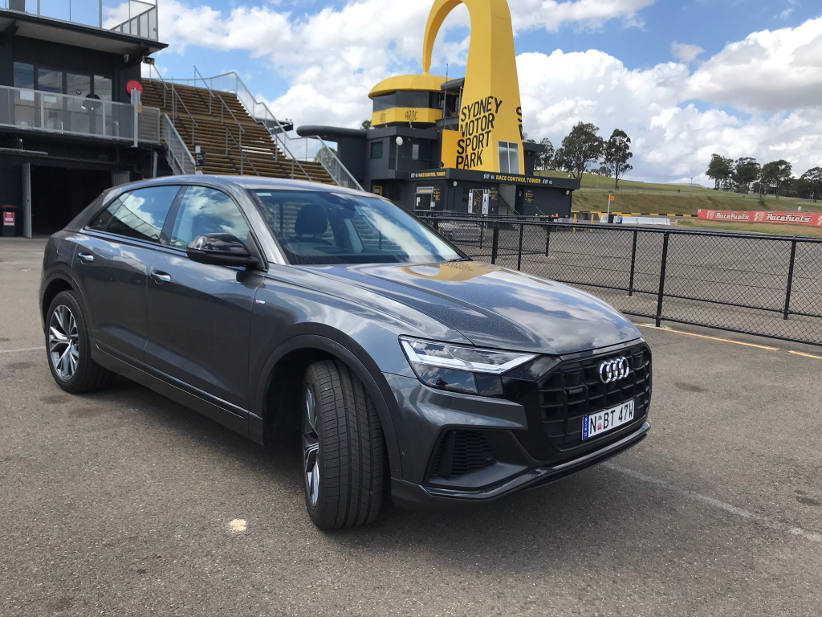 My ten year old son has discovered cars. It’s probably expected based on my background in fleet management and novated leasing, though his interest and knowledge has turned into an obsession that’s driving his sisters crazy.

Recently he was trying to spot an Audi Q8. Every time he saw an Audi SUV he would be asking, “Is that a Q8?”. Finally I spotted one in the back streets of an industrial area when I was trying to get around some Sydney traffic. He was too busy fighting with his sisters.

So to end the obsession, and give the family some relief, I asked Audi for a test drive.

Picking up a car from Audi Sydney Service Centre is a great experience. It’s above a shopping centre and below some apartments in one of the fastest growing suburbs in Sydney. The car parking is organised chaos though I’m oblivious; gazing at the beautiful metal all around.

Driving home I’m wondering why would I choose a Q8 when the Q7 seems to do the same job with extra seats. When I got out and did a walk around it hit me; the Q8 has a swagger that the family wagon Q7 lacks. It felt cool. Better still, my neighbours and work colleagues looked at me like I was cool which happens every time I bring home an Audi.

My son was stoked. Not only had he finally found one in the wild, he got to drive in it for a week. It was now his favourite car and his nomination for the next novated lease family car.

Driving it was fun. It always takes a while to settle into a new car. You need to adapt to the technology, remember where the buttons are, and get a good seat position. The two position memory seats in the Q8 made the last step easier. But with three screens to choose from and multiple ways to do everything, the technology and buttons took a couple of days. Once I settled in I started to enjoy driving it.

The driving is quiet. Starting with the 285/45R21 Hankook S1 evo3 tyres which are smooth as silk. Inside the cabin is as quiet as sound studio. It’s not something you notice unless you jump back into your ‘station car’ for a trip down the shops. Then you appreciate the $130k price tag.

A quiet cabin does have some downfalls. My wife and I realised how loud our kids are without the road noise and vibrations to drown them out. Unfortunately turning the radio up didn’t work.

Some design elements in the Audi Q8 didn’t seem necessary or simple to use. The radio volume button for example. At first it seems well placed on the passenger side since the driver has steering wheel controls. Though when the passenger is using the touch screen to change the music source, reaching down to twist a knob for volume control seems redundant.

Another feature Audi has persisted with is the writing pad on the lower screen. I found it inaccurate and a gimmick in earlier models. In the Q8 it works like drawing on an iPad. So it’s cool, but seems impractical in 2019 with Apple CarPlay and voice controls.

It was a great week and in the Audi Q8, now my son is hunting his next car.