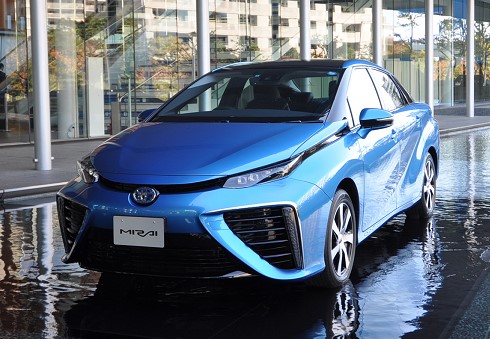 Hydrogen powered cars are the next big thing in the automotive world because it’s an extension of the electric and hybrid vehicles that have been around for many years. Toyota launched its hydrogen powered production model in Japan last December.

The vehicle is still driven by an electric motor but the electricity is created through a chemical reaction with hydrogen that is stored in a tank like petrol. It replaces the need to have specialised electric charging stations installed in homes, car parks and on the street which are expensive.

Toyota said in their press release “The Mirai delivers everything expected of a next-generation car: an immediately recognizable design; driving exhilaration stemming from superior handling stability achieved by a low center of gravity; and quiet but powerful acceleration provided by the electric motor”.

Toyota says “A new technique has been employed in the front face design to emphasize the left and right grilles that draw in air for the oxygen supply and for FC system cooling. The novel front face underscores the vehicle’s individuality”.

The front face is novel for a car design because it looks more like a whale shark. Toyota explains the overall shape like this – “the elegant side profile evokes the flowing shape of a droplet of water to express the vehicle’s characteristic of drawing in air and emitting water”.

It’s great technology but why does the styling need to be so polarising? Toyota did the same thing when the Prius was launched. The car was fantastic but it looked so futuristic it made people think twice about buying one.

In recent years they have launched the Camry Hybrid, Prius C and Prius V locally which offer the same technology (though now proven over a decade) in a package that looks like any other car of the day.

In 2015 hydrogen vehicles, like early hybrids, may only be for the early adopters and the individual styling makes them easy to spot. Though there is no doubt this technology works and makes sense as a green alternative to fossil fuels.