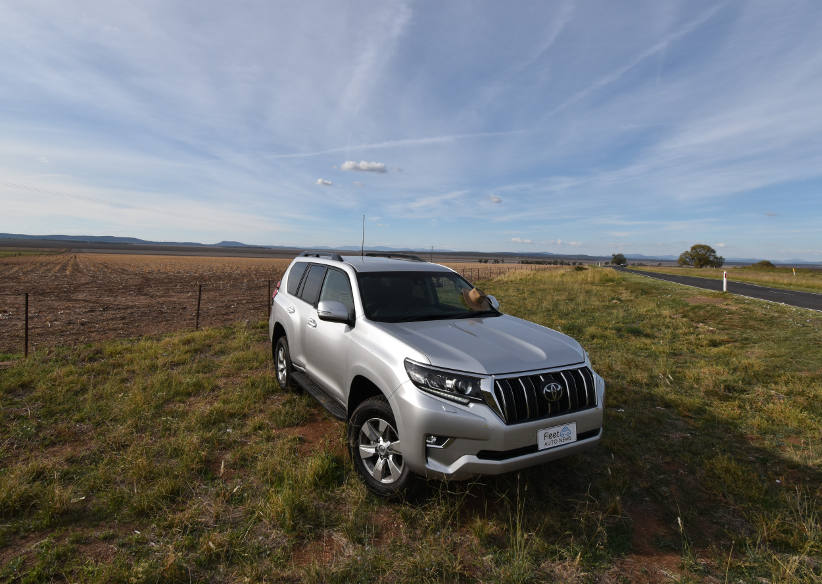 She might be one of the oldest girls at the ball, but Prado still has the style, comfort and performance to remain Australia’s biggest selling large SUV. So popular in fact, Prado was the second most sought after vehicle for novated leases in 2019.

There maybe more modern and seemingly more technically advanced large SUV’s/seven seaters on the market (Santa Fe, Sorento spring to mind) but with the exception of Everest and Pajero Sport, there’s very few that can hold a candle to Prado, when it comes to off-road ability.

Prado’s a family favourite, seven seater, great for towing and capable of serious off-road fun. In my week with it, I found Prado still delivers what it promises, comfortable with enough space for everything, can tow up to 3,000kg (braked) and it will pretty much go anywhere you’d want it to.

Prado is powered by a 2.8lt four cylinder turbo-diesel (130kW/450Nm) via a six speed auto. Ideal for highway cruising, towing, off-roading and darting about city/suburbs. Fuel economy is listed as 8.0lt/100km (combined cycle), however the best I saw was 10.0lt/100km.

Off-road Prado GXL is a serious 4WD, and makes your adventure easier and more comfortable, with Automatic Traction Control, Downhill Assist Control and Hill-start Assist Control. Good ground clearance (219mm) and approach/depart angles (30.4⁰approach, 23.5⁰depart, 21.1⁰ramp over) and wading depth of 700mm mean if Prado won’t get you there, you probably shouldn’t go!

On-road it drives beautifully, with a good driving position giving a commanding view of the road ahead. Ride comfort is good, with the suspension soaking up all the bumps/lumps on the road nicely as it rides on 17” alloys with 265/65R17 AT tyres. The front end though, liked a good dip and wallow turning into bends at highway speeds on some country roads. Nothing alarming, just noticeable.

At night, the headlights are brilliant with Bi-LED headlamps (plus LED DRLs and fog lamps) lighting your way.

Prado now has the option of a ‘flat tailgate’, meaning the tailgate is easier (not as heavy) to move (the spares mounted underneath the rear of the vehicle). The rear window now opens for quick access into the cargo area, where the flat folding third row seats help increase load capacity after you’ve been to Ikea again (Load space, 7 seats 120lt, 5 seats 620lt, 2 seats 1833lt).

The Prado GXL I drove was fitted with the optional “leather accented pack”, leather seats all round, power adjustable, heated and ventilated in the front and the two outer seats heated in the second row which is also 40:20:40 split folding. There’s plenty of head/leg/shoulder room for all in the front and second row, the third row is probably best kept for the kids on longer trips.

Tri-zone climate control is provided complete with rear seat controls and air vents for everyone. There’s also a ‘kid-view’ fold down convex mirror (to easily keep an eye on them), an A/C cooled ‘coolbox’ for your drinks and a little ‘hidey’ hole in the dash for your phone, plus a 220V AC outlet in the back, two 12V outlets and an USB connector. An eight inch touchscreen controlling the Sat Nav, stereo and Bluetooth connectivity for your phone is provided. Prado is yet to benefit from the inclusion of Apple CarPlay/Android Auto.

There’s a reason Prado is #1 in large SUV’s and such a popular novated lease option. It’s stylish, comfortable and will handle pretty much any task assigned it. Prado’s equally at home conquering the Cape /Kakadu or running the kids and their friends to soccer practice in Killara.