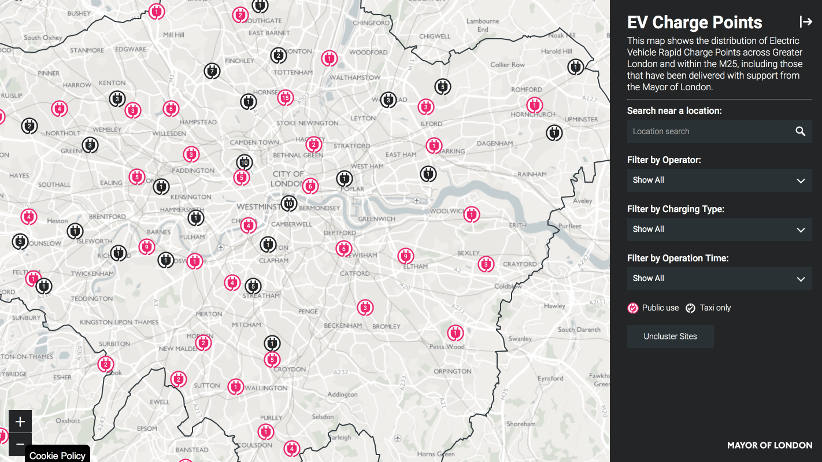 The city of London’s plan for EV infrastructure

Launched in 2018, the Mayor’s Electric Vehicle Infrastructure Taskforce is the first body of its kind, established with the goal of understanding London’s likely future EV infrastructure needs.

A map of London’s EV charging points can be found here:https://maps.london.gov.uk/ev-chargepoints/

The full delivery plan can be found here:http://www.tfl.gov.uk/ev-charging-plan

Representatives from the following organisations are on the Taskforce and they have been working together through discussions chaired by Deputy Mayor for the Environment and Energy Shirley Rodrigues:

The first wave of private sector commitments supporting the plan include:

The delivery plan includes an estimate on the required number of chargers required in future scenarios. These estimates are based on the relationship between the preferred way in which people will charge their vehicles (e.g overnight or rapid) and the potential number of electric vehicles on London’s streets.

The taskforce members are confident the current delivery schedule in London by the private and public sector, consisting of over 300 rapid charge points and over 3,500 slow to fast charge points by the end of 2020 will be adequate to meet London’s needs. However, more ambitious action will be required by the public and private sector to ensure London has the charging infrastructure it needs by 2025.

London’s public services including TfL, the Metropolitan Police Service and the London Fire Brigade are already committed to transitioning to electric fleets by working towards: