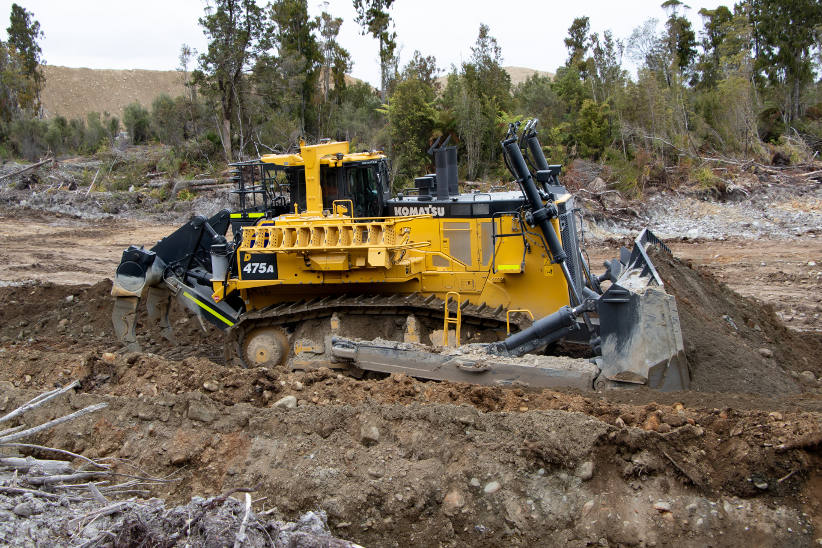 West coast miner Whyte Gold has this month taken delivery of the largest and most sophisticated bulldozer in New Zealand, to service its new claim in the glacier region behind Greymouth.

A five-truck convoy carrying the 115 tonne machine broken down into transportable capsules made the 500km journey from Lyttleton outside Christchurch to its new base at Rimu. Re-assembly will take two weeks.

The machine marks the start of a new phase in the development of the veteran gold mining company on a long-established site until recently believed to have been worked out.

Company principal Iain Whyte conducted tests which have convinced him that there is plentiful new material lying deeper into the substructure. Mr. Whyte believes the claim can be worked for at least another eight years, using techniques he has developed to access the site under increasingly stringent ecological controls.

He has purchased the Komatsu D475A-8, one of the first delivered by the Japanese specialist in the Southern Hemisphere, to anchor his operations.

The bulldozer is the largest in Komatsu’s range with levels of emission control at the leading edge of heavy machine capability. It is fitted with electronic controls so sophisticated that its essential operations are monitored by telemetry flowing constantly to Japan and Australia.

The new bulldozer is capable of extracting and crushing material with unmatched efficiency of time and materials which will limit and manage impact on the land. Operation is made easier with electronic control of the work equipment, including blade auto pitch and ripper auto return. There’s the potential for future expansion to Intelligent Machine Control, incorporating remote control and automation.

“Some say I would be better served with a smaller machine, but this bulldozer can extract substantial material with a single-pass, so it is actually in use far less than any alternative method,” Mr. Whyte said.

Whyte Gold had wound back its operations on a nearby site at Dungaville to comply with directions of the Department of Conservation and the Crown Minerals act, and it had sold its first D475 bulldozer, a previous model, to a local coal mining company.

“I was left with enough to keep ticking over – but I’ve worked with a lot of good local people and I felt I owed it to them, and to their future, to keep prospecting,” Mr. Whyte said.

“I tested a lot of claims, mainly on old workings – I figured the old guys didn’t tunnel for nothing.”
Whyte Gold’s new site was believed to have been mined out.

“But the previous miners worked only the top level,” Mr. Whyte said. “Further down there’s a wash with strong content.”

Whyte Gold will use its new Komatsu to open cut between 25 and 35 metres into the site to reach the new level. Komatsu positioned technicians at Whyte Gold’s purpose-built hard stand to assist with the final construction of the massive machine.

“It was fully built up and tested in Japan before it was shipped to New Zealand, Len Higgins, Territory Sales Manager, West Coast/Marlborough/Nelson said. “We had to semi-knock it down at Lyttleton in order to be able to transport it across Arthur’s Pass.

The rebuild commenced within hours of the 75 tonne main frame arriving at Whyte Gold on one low loader accompanied by another four trucks of essential components.