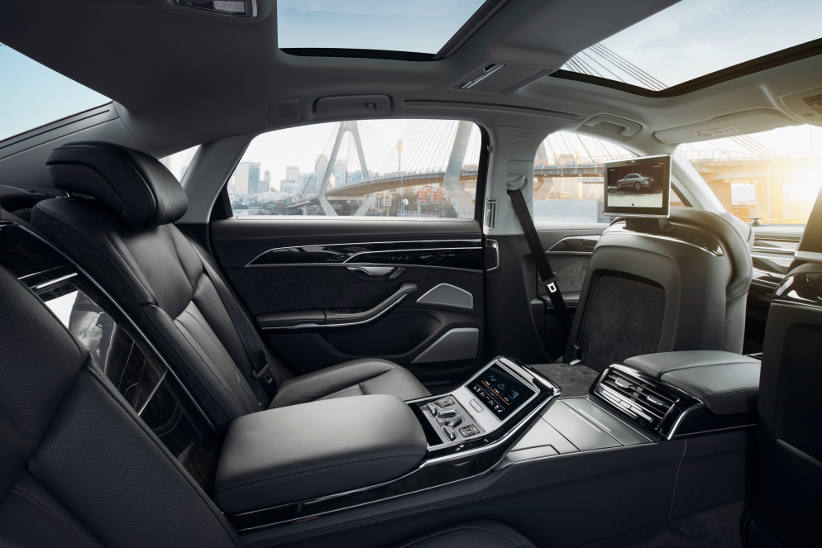 The launch venue for the all new Audi A8 was a great intro into the levels of luxury you get with this vehicle. It was held in a private Point Piper residence and everything about the event was special. But it was the time I spent transferring to and from that provided the most insight into how significant this new model would be for Audi.

An Audi A8 doesn’t appear on many fleets though in my time I have seen a few senior executives owning them including one big four bank CEO that also had a chauffeur. So I wasn’t sure how I would let FAN readers know what the new model was like compared to the old. That was until I started talking to the drivers that were employed for the launch.

Limousine drivers spend hours in their vehicles so they have a very strong view about their likes and dislikes – any they loved the new Audi A8.

The first hint that they liked the car was when I leaving the event and three drivers were sitting in the long wheel base watching the third State of Origin game via the digital TV reception on the front screen and two rear tablets. It was great for me because I almost said no to the launch so I could watch the game and I was just in time for the second half.

Earlier that night during the product presentation, Audi Managing Director Paul Sansom explained that the next 12 months would be significant for Audi as they had ‘an avalanche of new products’ that would build a contemporary and desirable line up. He acknowledged that the market for luxury brands had slowed in 2017 and 2018 but Audi were focusing on the customer experience and planned to build a following of loyal customers over time that would stay with the brand.

Matthew Dale, Product Planning Executive, ran us through the key points of the new Audi A8 and value was a consistent theme of his presentation including the statement that this model was up to $38,000 better value than the previous model.

I was interested in the history of the A8 to see how the introduction of new technologies and safety systems have filtered down to other models including fleet vehicles.  The first A8 was launched in 1988 with a V8 engine. In 1994 the first aluminium model was launched which was a significant achievement for a volume manufacturer. Audi continued the innovation in 2002 with its MMI system and Bi-Xenon headlights (lighting is apparently part of the Audi DNA). And then in 2010 it introduced collision avoidance systems and LED headlights to the A8.

As the presentation when on I found myself writing ‘WOW’ in my notes. It wasn’t because the features were new. It was because they made the vehicle and roads safe. I was excited about what would be included in fleet vehicles in five to ten years.

Crossing assist was the first thing that got my attention. When you are at a T-intersection the sensors will look left and right to warn you about oncoming traffic. Then I was amazed at the pre-sense rear sensor that is looking for a car approaching too fast that may result in a rear collision. There is an exit warning system that looks for cyclists when you open the door. It not only warns you but controls the electric doors to prevent you from opening them. And now there is low beam, high beam and laser beam headlights.

With up to 40 driver assistance systems the Audi A8 is the world’s first production model to have been developed for conditional automation (level 3). It has a powerful set of sensors including a world first laser scanner, a long-range radar, front camera, four mid-range radars, 360 degree cameras and up to 12 ultrasound sensors. It continually merges all sensor data in the central driver assistance controller so it can make decisions or warn the driver.

After driving the Audi A8 it feels like autonomous driving is only around the corner. Which will be great because I could spend more time enjoying the back seat foot massage and business class interior.