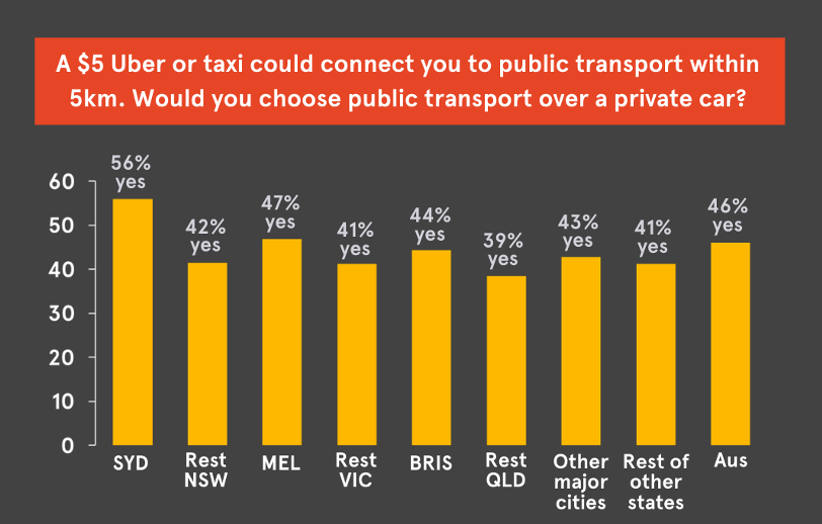 A survey on public transport by University of Sydney Business School confirms that finding a reliable and cost effective solution to the last let of a journey that is not serviced by public transport is the key to reducing car ownership in big cities.

According to the survey, around half of all people living in major Australian cities would abandon their private cars if they could travel up to five kilometres to a public transport hub by Uber and taxi for a capped fare of $5.

The survey, conducted by the School’s internationally respected Institute of Transport and Logistics Studies (ITLS) ahead of the COVID-19 pandemic in February, found that New South Wales motorists (51 percent) were the most likely to use taxis and Uber to access public transport services.

Less than half of the respondents in the other states, particularly those in South Australia, ACT, Tasmania, and Northern Territory, were likely to accept a capped fare offer.

Director of the ITLS, Professor David Hensher, said the “encouraging” results were evidence of the role rideshare might play as a first and last kilometre service supporting mainstream public transport.

“It opens up a need for a dialogue with government as to whether a subsidy scheme for the first and last kilometre might more than compensate for the levels of subsidy for the main public transport service by increasing patronage as well as reducing congestion on our roads in the large cities.”

“However, there remains the challenge as to how such attractive incentives could work in practice,” Professor Hensher said.

The Transport Opinion Survey (TOPS) also surveyed motorists on those features of public transport they believed should be given priority when it came to improvement, including travel time, service frequency, fare, crowding and reliability.

On a scale from one to five, 36 percent of Australians deemed reliability the top priority for improvement, followed by crowding with 28 percent. Fare, service frequency and travel time were of almost equal importance with each attracting about 26 percent.

“Public transport authorities continue to be challenged in our largest cities where there is unprecedented growth in public transport use, with crowding a major concern during normal periods of activity, but sadly not so during the COVID-19 pandemic,” said Professor Hensher.

The TOPS index of transport confidence, which measures public confidence in transport infrastructure and services provided by local and national authorities, is now at its highest level since a major fall in 2015.

TOPS is the only regular national survey (commencing in 2010) to measure public opinion on transport-related issues.