Recently Tesla Corporation invited Fleet Auto News to visit their exhibit at Motorworld Sydney, to see and experience their Model S and Model X cars. I was intrigued to see these ultimate incarnations of the electric vehicle and to get up close to the world’s fastest accelerating production car.

Most electric vehicles that I had seen previously all seemed to be about being an electric car, and that was their only purpose, so they were small, limited in their functionality and normally not very attractive.

Tesla has changed all that, the Model S and Model X are cars first, with very attractive styling, mind-blowing performance, functionality and practicality in their use. That means you would buy these cars, not because they are electric, but because they are incredibly exciting motor vehicles to drive and use in the everyday world, and that is what makes these cars such a ‘game changer’ for the automotive world. Or to put it another way, these cars are taking the auto world to the next level. 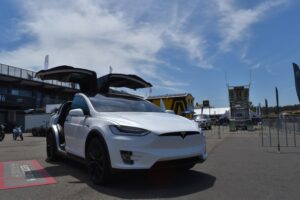 I drove the Model S with the P90D Dual engine configuration. And to put it mildly, I was blown away at how diabolically fast it is. Selecting “Ludicrous” mode in the car will activate the settings to give the car its astonishing acceleration abilities. 0-100kmh in 2.7 seconds! And it doesn’t make a sound!

The senses have difficulty contemplating this ‘neck-snapping’ leap forward when you accelerate, with the total lack of the sound and fury of the engine that you would normally experience with a high performance vehicle.

Another issue with electric cars in the past has been how far you can go before having to ‘fill er up’ or rather recharge the vehicle. Tesla vehicles will travel similar distances to petrol engine vehicles on a single charge, up to 500 to 600 km, depending on the vehicle model, type of driving and how heavy your right foot is. Just like any other car.

On the inside these are cars are very well appointed with a 17” touchscreen to help control all of the cars features, such as the automatic climate control, media and navigation centres, phone and internet connectivity, 12 way power adjustable heated seats and vehicle data and controls. The vehicle also has voice activated controls so you don’t even have to touch the screen. 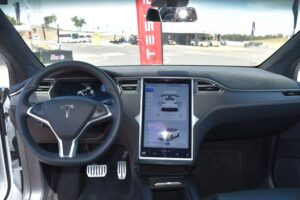 The usual array of safety features feature on these vehicles, six airbags, electronic stability and traction control, plus more advanced active safety features such as collision avoidance and automatic emergency braking. Also available is Smart Air Suspension that will automatically raise and lower the cars suspension as needed to adjust ride height.

As the car always knows where it is and remembers where it has been thanks its navigation systems, the car will adjust the ride height automatically to suit the road conditions it is or is about to encounter. Say you visit a friend’s house and they have a steep driveway, which you would normally scrape the cars nose on as you drove it up the driveway. Well, the Tesla will as you approach that driveway automatically raise the cars ride height to prevent that and remember it every time you visit that friend’s house. Now that is smart.

And that brings us to the BIG thing with Tesla, autonomous driving. Whist ‘autonomous driving’ is not yet permitted in Australia, the vehicles are capable of it. So until the law catches up, the vehicles can use their “Autopilot” mode which is like cruise control on steroids. Sitting in the driver’s seat and with your hands kept in close proximity to the steering wheel, “Autopilot” mode will drive the car at the speed limit, a safe distance from other vehicles, steer and brake as required without the driver touching a thing.

Tesla’s have the capability to ‘autonomous drive’ where permitted. And this is possible via their advanced camera, software, radar and navigation technologies. Every Tesla is connected in ‘real time’ to the ‘Hive’, the main computer at Tesla’s head office in California.

Tesla advises that this live connection and road recording from every Tesla vehicle worldwide, has mapped more roads for Tesla in the last six months than Google has mapped in the last 10 years! So the chances are, that driving a Tesla down the road, the car will know what is around the corner before you do!

The Tesla Model S and Model X are premium vehicles, at the top end of the market, bristling with all the latest and next level technologies and priced accordingly. But the Model 3 a coming, starting at less than $35K USD it will be Tesla’s most affordable premium sedan yet. And it will offer a range per charge over 300km and offer 0-100 performance in less than 6 seconds, along with all the other Tesla features.

The future is here and it is electrifying.

What’s the difference between GPS navigation, telematics and asset tracking?