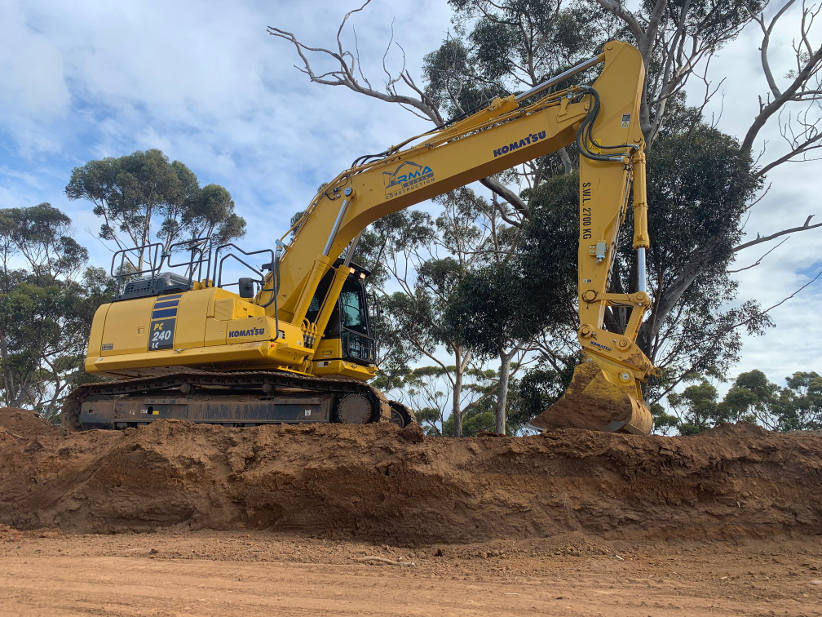 Matt Ayres was 16 and in year ten at Saint Paul’s College, Altona when one weekend he and his dad Rob used an oxy torch to cut the curtain side body off the family’s general haulage truck and turn it into a flatbed. It was a leap of faith.

Out of the blue, truckie Rob had been offered an infrastructure job laying underground cables and erecting street-lights – and he figured, why not. All he needed was a 1.5 tonne excavator, a sidekick and a flatbed truck.

“I’ll never forget it – the curtain side was attached in four places; we both had a go at the oxy and we winched it clean away,” Matt grinned. Matt was doing well at school – captain of the footy team, pretty sound academically and graduation was two years away, but that weekend they sorted it out.

Father and son formed a start-up business, RMA (for Rob and Matt Ayres) which today, on Matt’s thirtieth birthday, has resulted in the young bloke heading a civil excavation company that continues to grow in size, and stature. He’s just taken delivery of his first Komatsu WA150 wheel loader to work alongside the two excavators he already owns.

He employs eight people, has three beautiful kids of his own, and he’s working flat out because “if you don’t keep going forward, you’re going backwards.”

Matt admits he hesitated when his dad put the opportunity to him. “On the one hand I figured I should stick with school to completion, but he’s my dad and he’s always done the right thing by me.”

And there was the inescapable fact that Matt was a machinery enthusiast. “It’s like with cars, you’re either Ford or Holden – I’m Komatsu,” he said.

The first machines weren’t Komatsu, but Matt acquired his skills when just months into the business he kicked his dad off the controls and took over.

“People we worked for kept telling me I had a long way to go, but I wasn’t discouraged, it just spurred me on to get better,” he said.

The moment of truth came on a big civil job in Geelong. “I rocked up to the wetlands; they’d dug them out by machine and about 70 truck loads of top-soil arrived, and it was up to me to smooth it all out. “I guess I faked it, till I made it.” Matt had closely observed drainage crews working with Komatsu excavators and loaders and “I figured I had to expand into this.”

He went to people he’d met in the business and they counselled him against it – “that size of operation is not for you,” they said. – More discouragement. Out of the blue, Matt became aware of a big pipeline opportunity at the Mobil Oil Refinery and he looked for an edge that would get him the job.

“I’d read about an attachment that’s big in Europe, but not so much here,” he said. It provided substantial flexibility, rotating through 360 degrees, tilting 45 degrees and most importantly allowed the operator to swap between bucket, hammer and hydraulic grabs without leaving the cockpit.

He took the idea, and the potential of the Mobil contract to Komatsu. “I think their first reaction was: “Yeah, right,” Matt said. “They didn’t know me, but they listened and when they looked at what Dad and I had achieved they could see we had a good reputation, already.”

Komatsu’s Geoff Killury helped Matt get Komatsu finance for his first PC138US-11 excavator and arranged a service agreement, and Matt enthusiastically took the entire package to Mobil and won the contract.

“They loved it and told me we were working to the highest standard they’d seen.”

Matt, the Komatsu enthusiast, had become part of the Komatsu family – which led him to his first invitation to ‘Boots On’, the company’s biannual field day.

“It was amazing – more machines than I’d seen in one place before and I tried to drive all of them.”

He fell in love with the new PC240LC-11, 24 tonne excavator equipped with Intelligent Machine Control and Electronic Proportional Controls, at the same time he became aware of a major drainage contract.

Despite his passion for both the brand and the business opportunity (“You have to have a crack”), Matt has learned to proceed with caution – always involving all of the stakeholders, from potential clients, to machinery partners, to employee, in his opportunity.

“In Komatsu’s case I had to convince them I’d get the contract – they don’t want to sell a $300,000 machine to someone without a clue,” he said. With Komatsu’s support, he pitched for the job and won it.

Initially he arranged to hire a series of wheel loaders from Komatsu to work alongside the excavator until he found the right combination, then he bought a WA150 to add to his fleet.

“I’ve always made money from my jobs because I have a good accountant and I’ve worked hard to get a good relationship with the people I work for,” Matt said.

Today, just after his 30th birthday, Matt and Rob still work from the same yard and office at Lara. Rob maintains the electrical infrastructure business which kicked them off, and Matt runs the civil side.

“We talk to each other every day,” Matt said. “The way I see it, he feels like he’s instilled the right sort of stuff in me.”