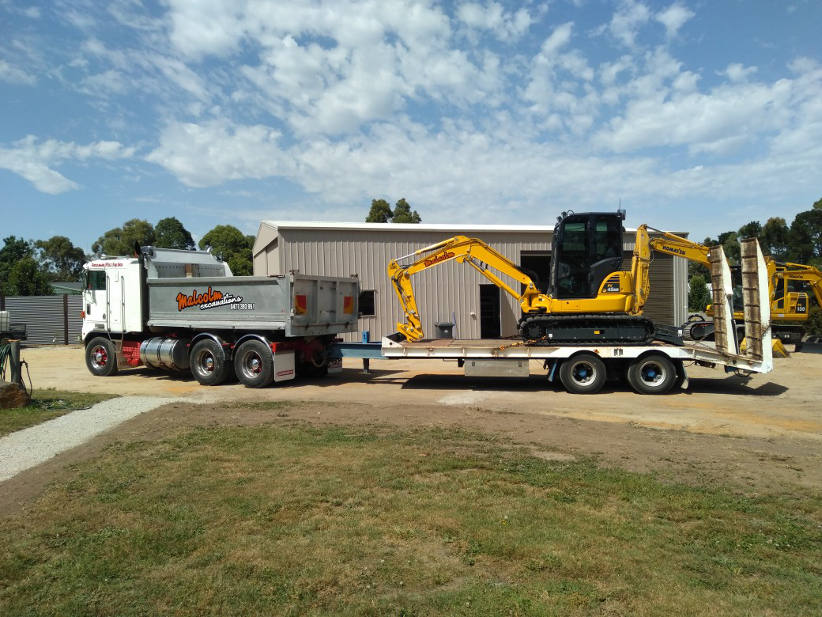 Father and son combine to excavate with Komatsu

Posted By: Marcon: August 15, 2019In: Plant and Equipment
Print Email

Rhys Malcolm was just five years old when he drove his dad’s excavator, ten when he first went on the job with his dad and twenty-four when he bought a new machine and started his own business, just like his father.

Rhys and his soon to be wife Cassy have even built their dream home off plans that are the same as those of his parents’ house.

“I guess you could say I look up to my father a lot and I want to succeed just like him,” Rhys said from the cabin of his newly delivered Komatsu PC45MR-5 excavator.

The Malcolms’, father and son, each run excavation businesses 40kms apart in the Gippsland region of Victoria, and they are foundation members of their own mutual admiration society.

Glen Malcolm started his own successful business when he was 35-years-old, “married, with three kids and a mortgage.”

“Rhys has started ten years younger, with a new wife-to-be and a mortgage, and I couldn’t be prouder of him,” Glen said.

More than twenty years ago Glen bought a second-hand Komatsu PC120-6 from the company for which he worked when its owner decided to close down, and it has formed the foundation of his all Komatsu fleet.

“Rhys worked alongside me as a kid, when you were still allowed to take your children on the job, but when he left school, I sent him off to other people to gain broader experience,” Glen said.

When it came to Rhys wanting to start his own business, Glen pointed him to the companies and associates he trusts. He started on the shovel and worked his way up just like everyone else. Watching other operators to see what they did different.

Rhys shopped around and then followed his father’s advice, securing a new Komatsu PC45MR-5 complete with purpose-built factory approved attachments and financed by Komatsu.

“It wasn’t like dealing with a salesman – I needed a lot of advice to know the numbers were right, and that’s what I got,” Rhys said.

“It’s all about the service you get after the sale,” Glen said. “I made my recommendation to Rhys knowing he wouldn’t be let down.”

Rhys won his first contract, a six-month job on the Heidelberg Repatriation Hospital, before he bought his excavator, so Glen loaned him his PC55MR-3.

“They’re very similar machines,” Rhys said, “but you can tell the difference in the generations with just the little things like toggle switch on joystick to control the auxiliary attachment, the instrument panel. Of course, I made the rookie mistake of driving mine onto its truck before I realised the doors open outwards and don’t slide like the PC55,” he grinned.

Both machines are fitted with the KOMTRAX vehicle tracking and analytics system, and while Glen relies on it for his fleet, Rhys has been “so busy working I haven’t fired up the app yet.”

The Malcolm’s businesses are run under different names, but on almost identical principles: Glen’s wife Melinda, Rhys’ mum, runs their office and so now does Cassy for Rhys. The father and son see themselves not as competitors but as overload relief for each other. When Rhys and Cassy go on their honeymoon this winter Glen will make sure Rhys’ 24/7 business meets its obligations to its clients.

“It’s all I ever wanted to do,” Rhys said. “It’s more like a hobby than working. I learnt the technique from Dad – things that other operators might never know.”