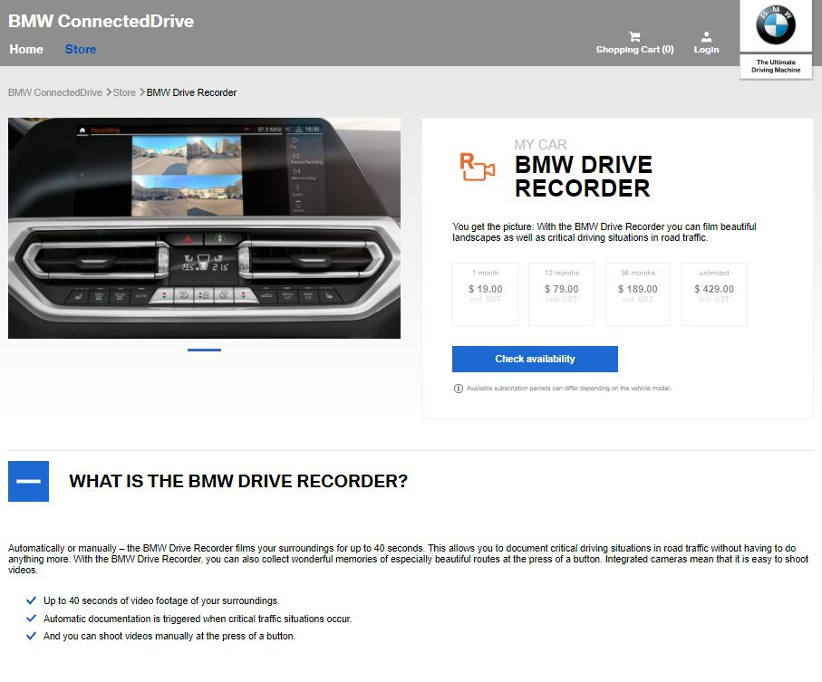 BMW Australia has introduced a first for the luxury segment by offering owners online upgrades that can be downloaded and installed without their vehicle even leaving the driveway.

The updates can be downloaded via the BMW ConnectedDrive Store and be fully functional within minutes.

The first upgrade available is High Beam Assistant for both the all-new BMW 1 Series –  which went on sale in October 2019 – and the 2 Series Gran Coupé, which launches in Q1, 2020.

High Beam Assistant uses a light-seeking camera located in the rear view mirror housing to monitor the road for up to 700 metres ahead. When enabled it adapts to the conditions and prevents glaring other road users.

BMW Drive Recorder enables the vehicle’s surround view camera system to capture video recordings of the immediate surrounds of the vehicle for up to 40 seconds.

The system can either create the recording on demand or generate recordings automatically in the event of a collision.

It uses all four surround view cameras by default but drivers can also configure the system to record using the front or rear cameras independently.

In addition, all recorded videos can be exported onto a USB drive and include the following data parameters: date, time, speed and GPS coordinates.

Applicable models and relevant production timing for BMW Drive Recorder are as follows:

Vehicles must also have Parking Assistant Plus, which is standard on all the above model variants except 320i. A Remote Software Upgrade will be available this year for vehicles built prior to July 2019. Additional upgrades and updates are planned to be added to the BMW ConnectedDrive store for other BMW models in the future.