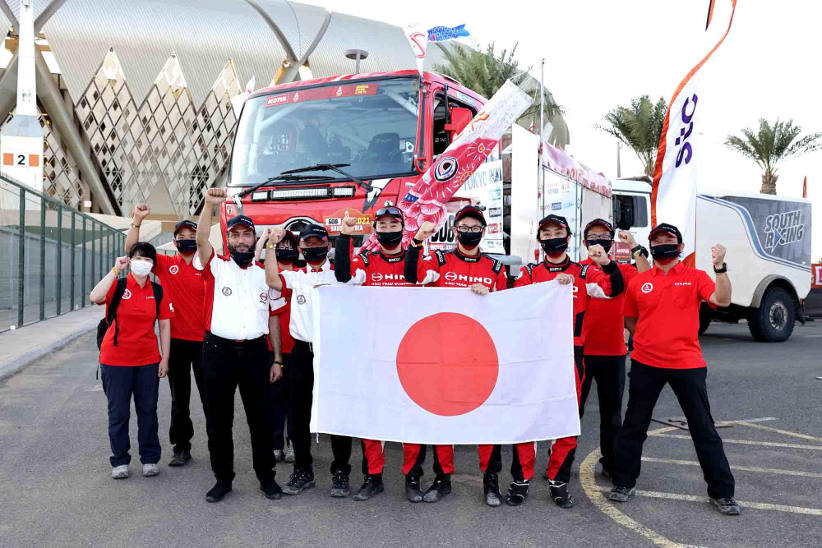 A dozen Dakar wins for Hino

Hino Team Sugawara has continued its Dakar Rally success clinching its 12th consecutive victory in the Under 10-litre class at the 2021 event, which was held in Saudi Arabia from 3rd to 15th January.

For the second consecutive year, the Hino 500 Series was again piloted by driver and team director Teruhito Sugawara, and navigated by Hirokazu Somemiya and Yuji Mochizuki and finished 12th overall.

The 2021 Dakar Rally was the 30th consecutive race for Hino since it became the first Japanese manufacturer to enter Dakar Rally in 1991. Due to the COVID-19 pandemic, the team only entered one Hino 500 Series in this year’s rally, and the support team was scaled back considerably with only minimal testing able to take place.

Starting in Jeddah, the 2021 rally raced over 8009 kilometres, of which 4767 kilometres were Special Stages (SS). In the 403km SS3 based out of Wadi Ad-Dawasir in the southern part of Saudi Arabia, Hino Team Sugawara suffered a rollover on a dune just before the 137-km point.

All three crew members were fortunately unharmed and were able to continue racing after another team helped them set the truck back upright. The truck ultimately finished the stage at 26th place overall, and dropped back to 18th overall.

Over the ensuing stages, the team delivered consistent results to climb up the overall standings to finish in 12th while also clinching victory in the Under 10-litre class.

Driver Teuhito Sugawara expressed his gratitude to the team after another gruelling Dakar Rally. “The biggest issue this time was the rollover and the emergency repair to continue the competition. I’m sorry for the rollover, but thanks to everyone’s efforts, we were able to come this far.”

Powering the Hino Dakar Rally truck is an enhanced version of the Hino A09C 6 cylinder engine, the production version of which is available in the 500 Series Wide Cab trucks in Australia.

The truck also features full-time 4WD and an 8,866 litre direct injection turbocharged and intercooled engine, which is matched to a six speed manual transmission.