A significantly upgraded version of Toyota’s seven-seat Kluger SUV is set to be previewed at this year’s New York International Auto Show, running from March 25 to April 3 2016.

Technical highlights include the adoption of Direct-Injection for the 3.5-litre Dual VVT-i V6 engine and a newly developed ‘Direct Shift’ eight-speed automatic transmission.

Scheduled to arrive in Australia in the first half of 2017, the revised Kluger should continue to be one of Toyota’s most popular models for novated lease buyers because the new model features fresh exterior styling, with a new upper and lower grille design and restyled tail lights.

“Its combination of performance, space, safety and efficiency has made it an Australian family favourite, and these upgrades to the current third-generation version will help further cement that position,” he said. 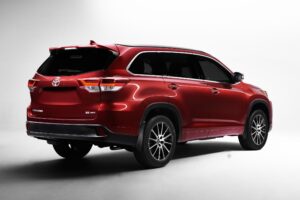