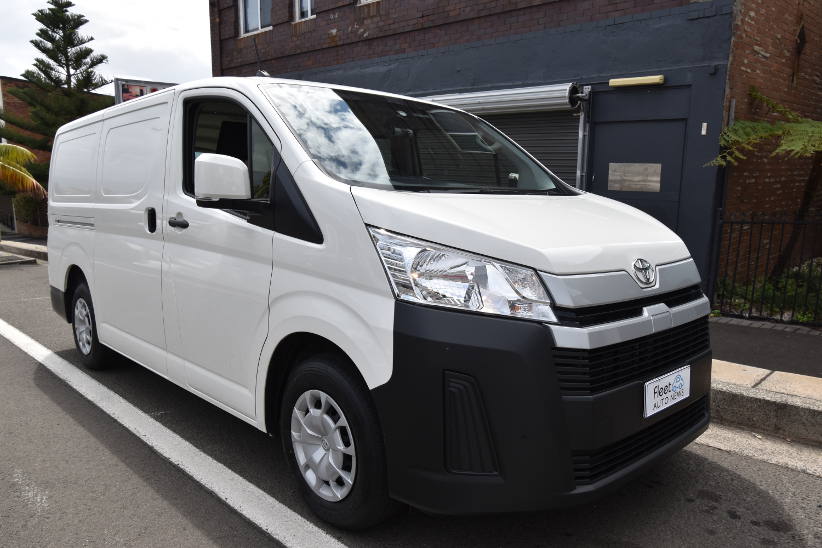 Bigger, better, more safety features and improved styling has Toyota’s sixth generation Hiace not only carrying the goods, but looking the goods as well.

Hiace has been Toyota’s workhorse van forever (since 1967). The previous (fifth generation) model was a decade and a half old. The sixth generation model sees Toyota move to a ‘short’ bonnet design like its competitors (Transit, iLoad, Transporter) rather than its traditional ‘cab over’ design. The benefits of this new design will be felt by the driver, passenger and the mechanic (you don’t have to lift up the passenger seat to get to the motor!).

For this review, I drove both the LWB (petrol) and SLWB (diesel) models, both with six speed automatic transmission.

What struck me about this new Hiace, is not only how much bigger it is versus the previous model, but how good it looks! Toyota have totally re-designed Hiace, with an edgy and modern style, that’s a major departure from previous models. Colour coding of bumpers and even chrome grille accents are available on diesel models and they look great! Giving Hiace a strong road presence with a quality look that Hiace has not known before.

Equipment levels and safety features are now abundant on Hiace, with Toyota’s Safety Sense system standard on all models, featuring:-

On the convenience side of things, Hiace has really stepped up, with a seven inch touchscreen controlling Sat Nav, Bluetooth and even Apple CarPlay/Android Auto. And across all models the steering wheel is leather! Now Hiace not only looks good, it’s a very comfortable workplace; with a great driving position, excellent forward visibility and almost endless options to accessorise it to suit your business needs. Commercial and fleet drivers, rejoice!

Toyota must think van drivers drink a lot (we all know fleet drivers need their coffee in the morning) as there are three cup holders and two bottle holders for two people. Also there’s two 12V outlets, USB and auxiliary connectors in the dashboard. The second of the two 12V is located at the top of the dashboard, which I found very handy to connect my dashcam to. The only shortcomings I found with Hiace was the lack of adjustable lumbar support for the driver and no adaptive cruise control.

In the back, is where Hiace gets the business done. Huge cargo capacities for both vans, plus large sliding doors on either side and a ginormous rear tailgate, allows easy access for loading/unloading. The lack of ‘barn style’ rear doors though, may dampen the appeal of Hiace in some quarters.

Driving both models (LWB and SLWB), honestly, I would say in terms of ride quality, they would be the most comfortable vans I have driven. In NVH terms not so much, as neither were fitted with the optional partition/barrier to separate the cabin from the cargo area, quietening road noise.

Engine performance for a van is astonishing. The turbo diesel (130kW/450Nm) provided smooth powerful acceleration on tap when required, whether highway cruising or darting about in city traffic. And as for the 3.5lt V6 (207kW/351Nm), OMG, it’s an absolute screamer! A van should not go this well or this fast! I’d venture to say that Hiace is the class leader now in engine performance. But, as they say ‘power comes at a price’, with the diesel listing fuel economy at 8.4lt/100km and 12.0lt/100km, for the petrol. However, in my time with the two vans, I saw the diesel go through 11.7lt/100km (even with an auto stop/start function) and the petrol 12.4lt/100km.

Let’s face it though, Hiace is all about doing the business. And the sixth generation Hiace is bigger and better than ever before, cargo capacity is now voluminous, with vehicle performance and looks that any fleet driver would be proud to be seen in. The Hiace range really are the Cargo Kings.