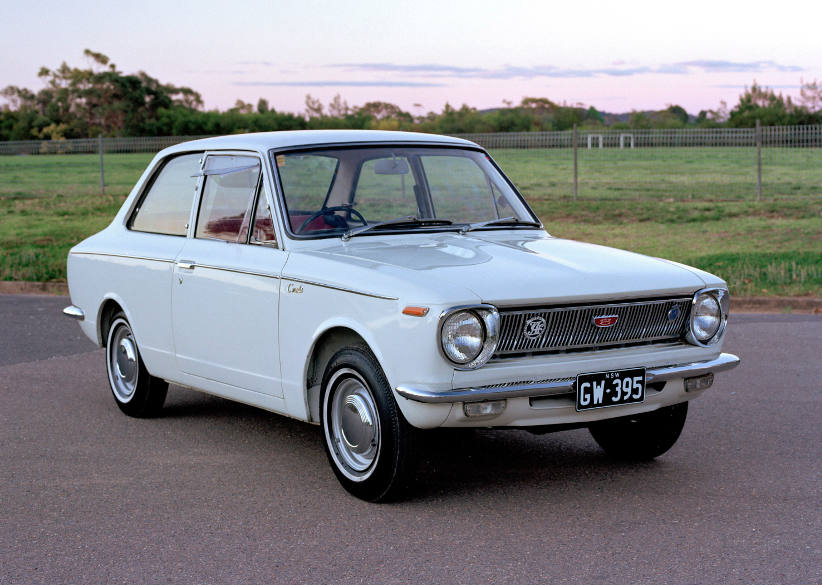 The history of Corolla in Australia

Further styling refinements produced a car with curved lines while a longer wheelbase provided more interior space and improved ride comfort and handling. The engine was enlarged to 1.2-litres delivering a substantial increase in power while the model’s growing popularity encouraged Toyota to offer more variants with a coupe, sedan, wagon and even panel van on offer and three trim grades for the coupe and sedan versions.

With the world in the grip of a fuel crisis, fuel economy came to the fore in the minds of car buyers and the third generation Corolla delivered low fuel consumption and reduced emissions thanks to its pioneering proprietary Toyota Total Clean emissions control system. At the same time, the car’s more curved surfaces, optimised in a wind tunnel for the first time, improved aerodynamics. Inside, the high quality finish was complemented by an increase in safety and comfort features. The popularity of Corolla had grown to a point where sales topped 20,000 in 1975 and have remained above that every year since. 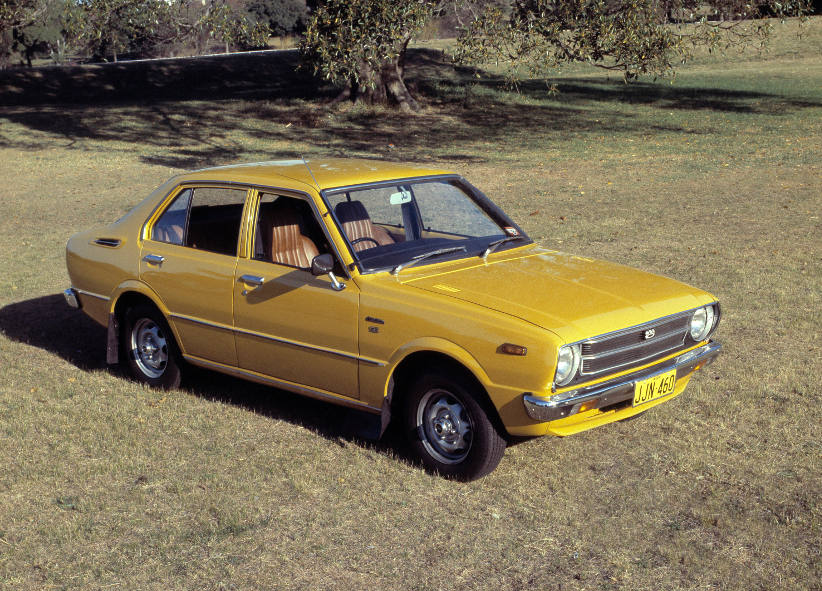 The sharp-edged wedge-shaped fourth generation Corolla was the last to feature a front engine, rear drive layout with the now 1.3-litre engine driving through a choice of four or five speed manual gearboxes or three-speed automatic depending on the variant. Ride and handling improvement came from a new coil-sprung rear suspension on most models and towards the end of the run, a new 1.6-litre engine was offered on higher grade versions. 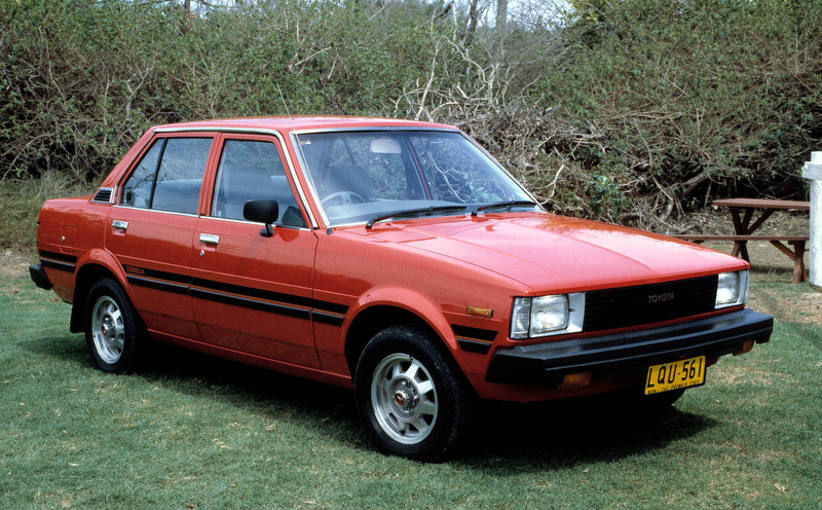 The arrival of the fifth generation in 1985 marked the beginning of a new era for Corolla. The range was trimmed down to a four-door sedan, five-door hatch and five-door liftback Seca and to further improve space efficiency, the cars were all front wheel drive. Designed for the first time with the aid of computers, it carried over the 1.3-litre and 1.6-litre engines but other advanced technologies including an electronically controlled four-speed automatic transmission and twin-cam multivalve engine technologies were first in class. Further refinements to the cabin delivered greater comfort with power steering and air conditioning offered across a broader range of variants. 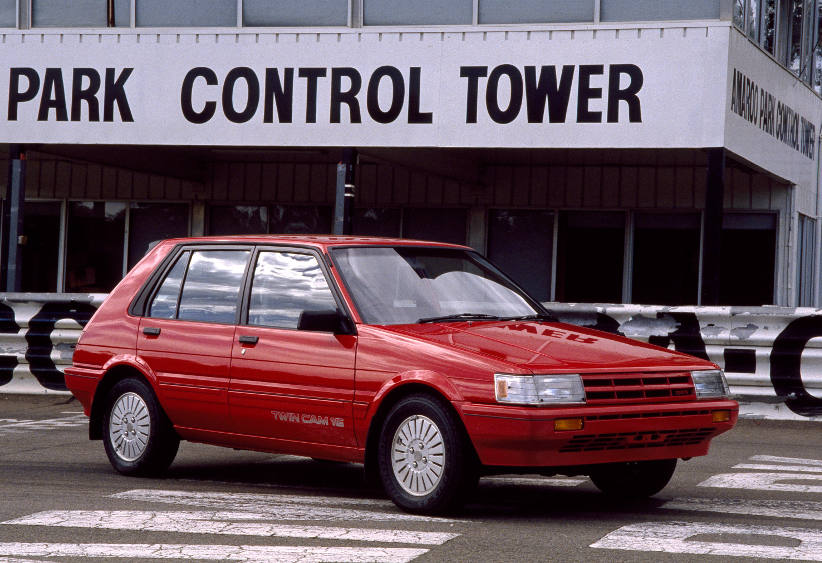 The sixth generation Corolla arrived with a more premium quality look and feel – inside and out. The largest Corolla to date, it offered a spacious, comfortable cabin and three new twin-cam, multivalve engines: 1.4-litre and 1.6-litre carburetor-fed units and a premium 100kW 1.6-litre fuel injected engine. A fuel-injected 1.8-litre engine was added to the lineup in 1992 and this was the era in which Toyota made its mark in local motorsport with Corolla taking class victories at Bathurst for eight years in a row from 1985-1992. 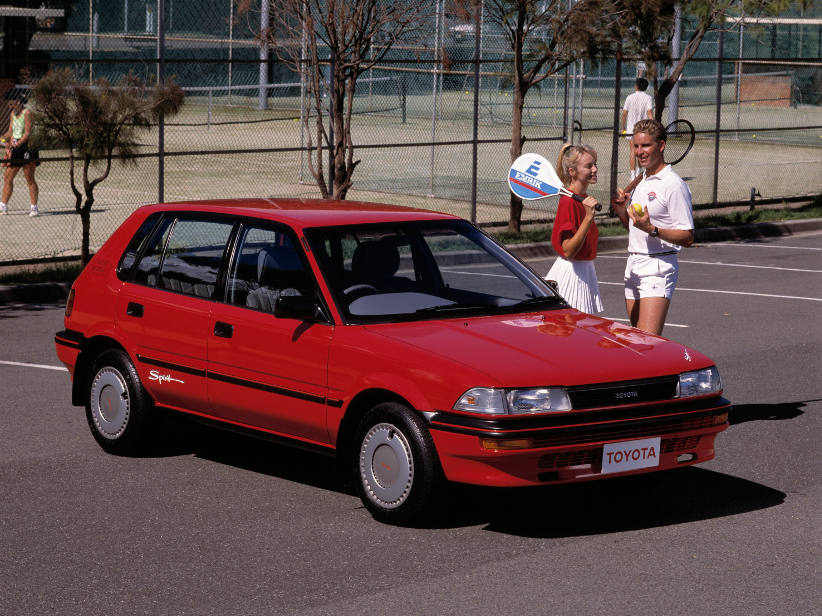 Toyota launched the seventh generation Corolla in 1994 with a lineup of 13 hatch and sedan versions that were all built locally in a brand new production facility at Altona. With the choice of fuel-injected 1.6-litre and 1.8-litre petrol engines, both hatch and sedan were larger and more rounded than their predecessors offering more interior space. For the first time in a Corolla, the availability of a driver airbag and anti-lock brakes added further safety. 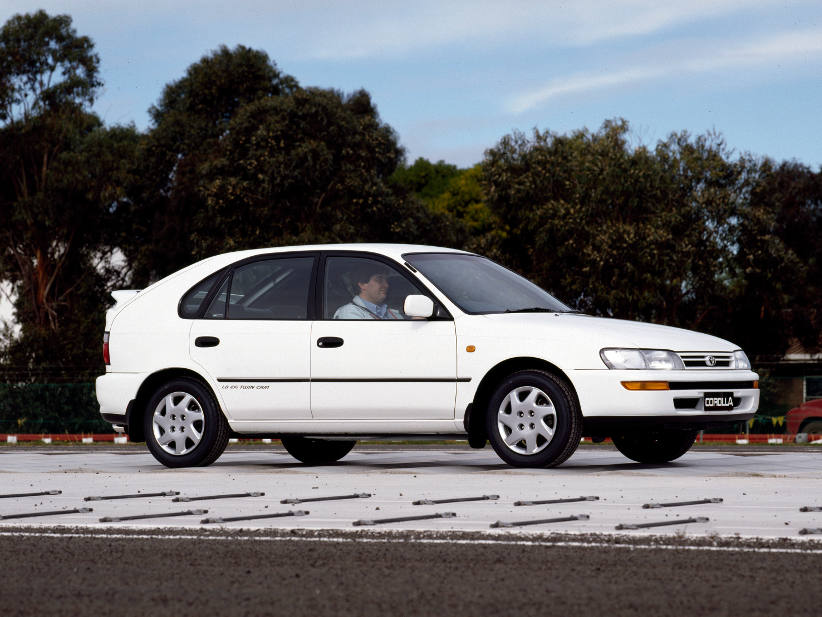 The first of the eighth generation Corollas to be sold in Australia marked the return of fully imported cars with a European-style liftback arriving in 1998. Following the cessation of local Corolla production the following year, the facelifted version of that car and a new imported Corolla sedan – with a choice of 1.6-litre and 1.8-litre engines – formed the lineup. Locally, Toyota had a hankering to produce something a little more sporty and, in 2001, developed a limited edition Corolla Sportivo featuring a 115kW turbocharged 1.8-litre engine mated to a five-speed manual gearbox. 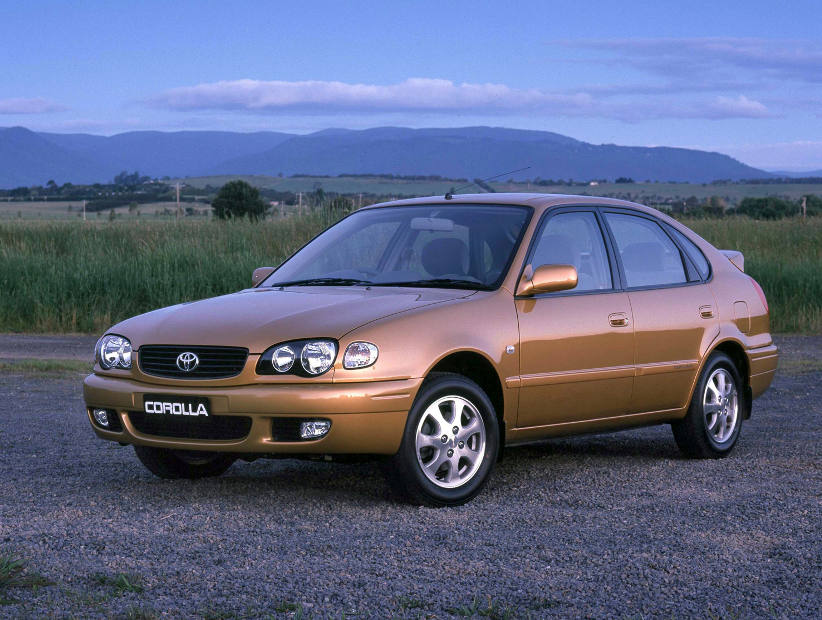 This was a marked change in direction for Corolla. Building on its quality reputation, the all-new generation sedan, hatch and wagon delivered sharper and more distinctive styling, more safety features, and a higher level of interior finish and equipment. Advanced engine technology including variable valve timing boosted the performance and efficiency of the sole 1.8-litre petrol engine offering. 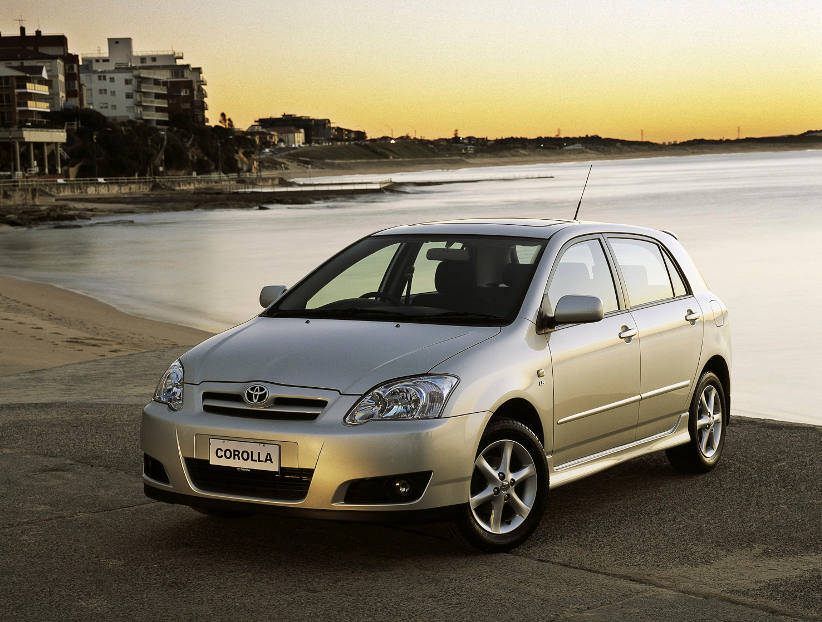 Recognising the diverse appeal of the hatch and sedan to customers, the new larger 10th generation introduced dramatically different styling for the two Corolla models. The refined sedan was topped by a premium Ultima version while the hatch featured a sporty ZR model, appealing to a younger audience. A new more powerful 1.8-litre engine was mated to either a six-speed manual or four-speed automatic transmission, and advanced safety features offered the availability of seven airbags including a driver kneebag, ABS and electronic stability control. 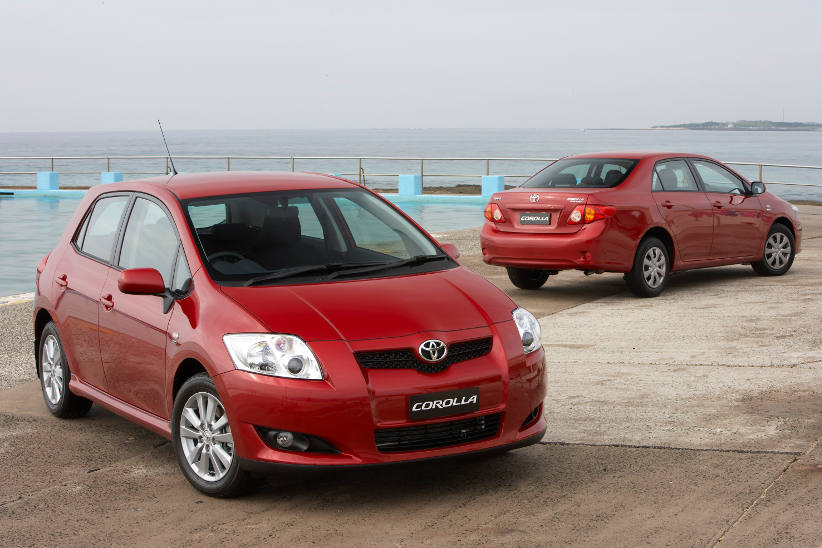 The 11th generation delivered a stylish Corolla hatch and sedan that further enhanced the look and feel of Australia’s favourite small car with an emphasis on high quality design, materials and finish, new comfort and multimedia technology and gains in safety features. Engine enhancements, aerodynamic improvements, weight savings and other measures contributed to efficiency gains across the range and in what was to be a foreshadowing of the future, it introduced a hybrid powertrain to the range for the first time in 2016. The strong, fuel efficient petrol-electric drivetrain joined the existing 1.8-litre petrol engine and improvements to the chassis and suspension provided more dynamic handling. 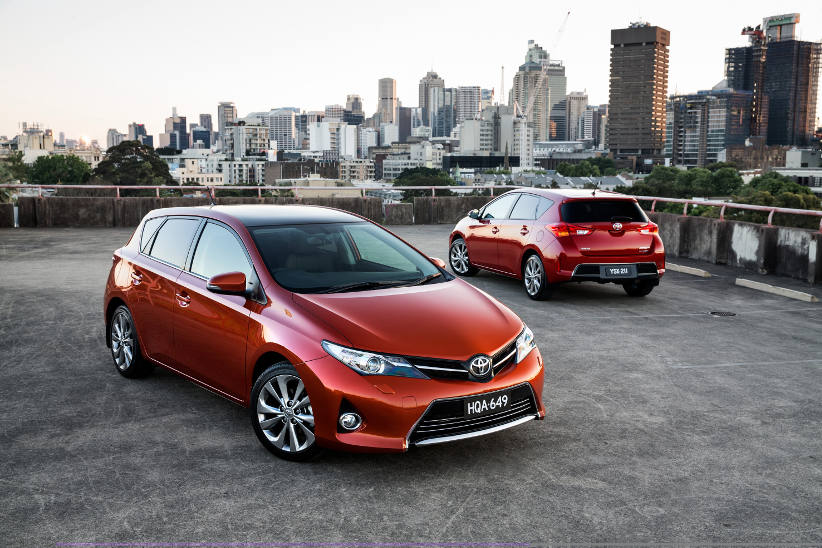 The arrival of the 12th generation Corolla brought even further improvements in dynamic handling and superb ride comfort, with the car being built on the all-new Toyota New Global Architecture (TNGA) platform. A new 2.0-litre petrol engine delivered the performance to match the bold new styling while the broader expansion of the hybrid offering for the hatch and sedan range appealed to customers seeking performance, efficiency and a lighter touch on the planet. The introduction of the Toyota Safety Sense1 suite of advanced driver assistance technologies provided class-leading safety and the stylish new interior offered new levels of comfort, convenience and infotainment. 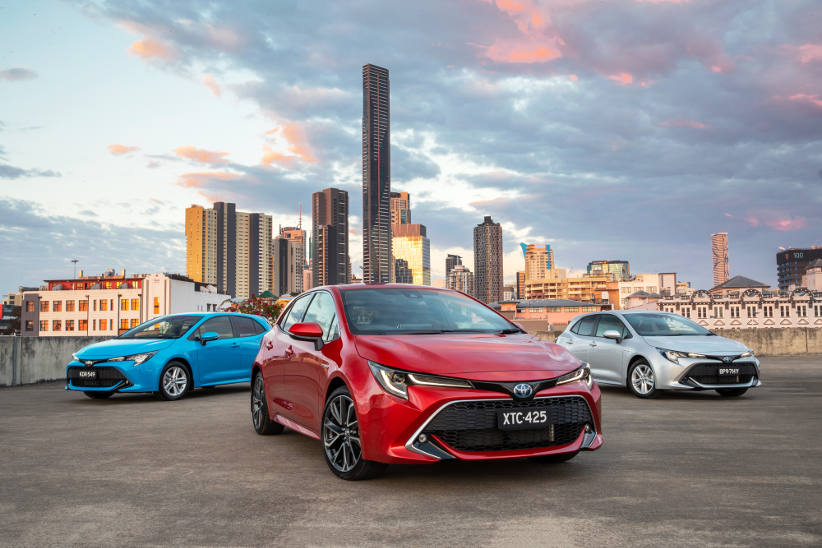