The VW Caddy has always been a practical vehicle which potentially restricts the target market if you subscribe to the theory that emotion influences new car purchases. Though after spending a few days in the different variants of the new Caddy 5, I became attached to the Caddy TDI320 and Caddy Cargo Max TDI 320.

It feels like every part of the Caddy has been designed for function. On the back of the front seats in the Caddy Life there is a tray table which would be perfect for families. After several COVID years without air travel, my younger kids were happy to pretend it an aeroplane. While the older one enjoyed the third row seats which were elevated like a movie theatre. 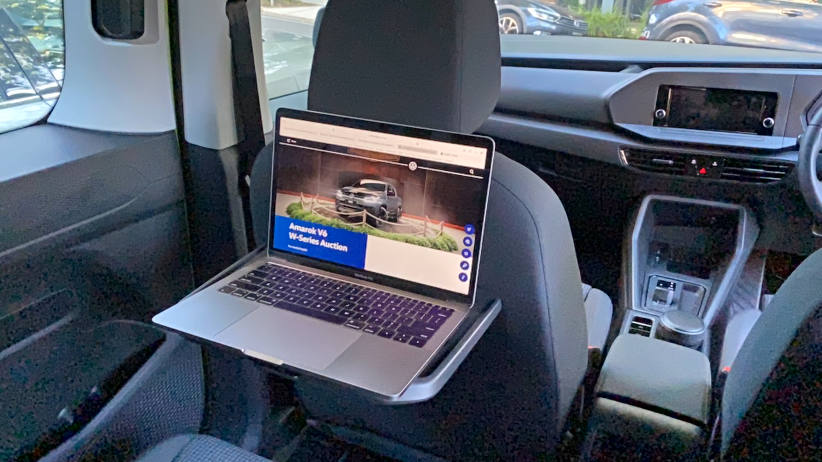 For prospective parents, transitioning from a lifestyle car to one suitable for a family is a traditional path. The majority (as I did) choose an SUV that will provide more room for a pram without labelling them as parents that have given up their previous identities. If I had my time again knowing the demands my family would place on a car, a practical VW Caddy would be on my shopping list.

It drives like a car and the sliding slide doors eliminated the stress of tight shopping centre car spots. I stopped screaming, “Watch the door!”, for a week as the kids clambered out of the rear.

Styling has improved as well. The previous models weren’t bad, however they looked utilitarian. This model has the lines and good looks of an EV. At first glance, the lack of open space on the grille for air flow did make me question the power train. 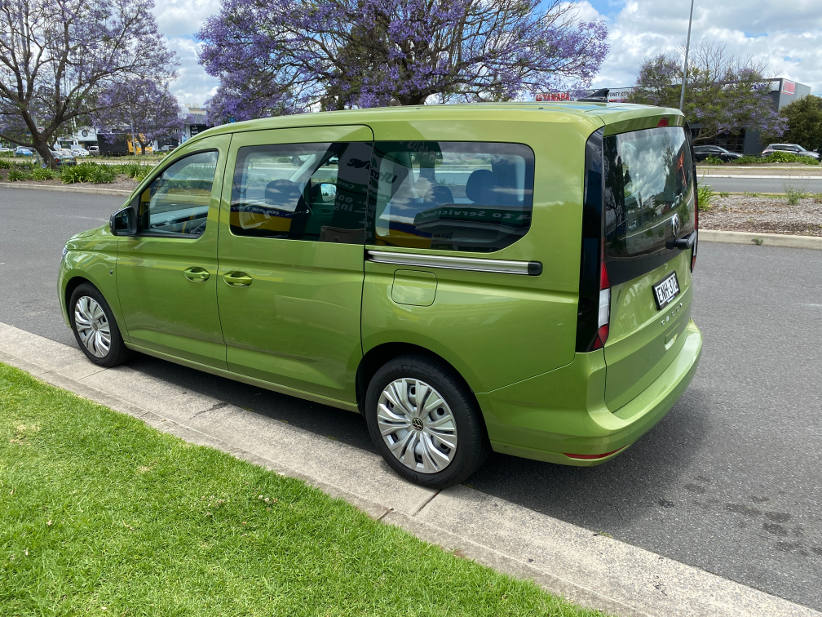 I picked up the Caddy TDI320 in Golden Metallic Green (or Kermit the Frog green according to my colleagues) and surprisingly adapted it to our lifestyle very quickly. There were some great features not found in other cars of similar specification.

The driver’s seat was super comfortable with an extender to provide leg support after hours in the saddle. The infotainment system allowed the Bluetooth connection of two phones (work and personal) and easily switched between each one when they rang. Such a great feature with untold benefits to reducing driver distraction and family stress. 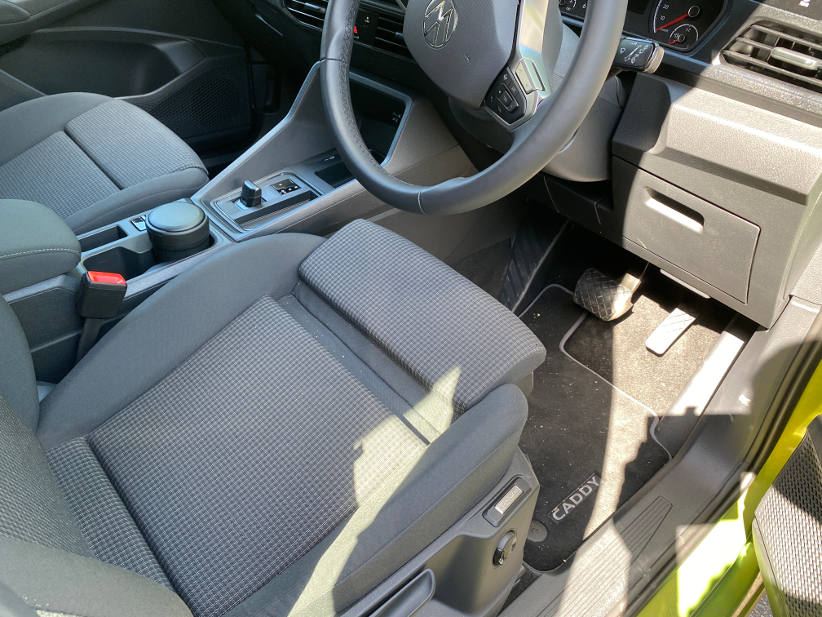 Sun visors aren’t something I normally notice in a car; they are just there. Though in the Caddy they are extra large which comes in handy with such a large windscreen. It was early summer during my test drive and the sun was creeping lower in the sky. A simple thing done well.

Being based on a workhorse, the Caddy people mover has lots of storage. The overhead storage space was a great size and very practical for hiding a MacBook and other valuables from sight. The downside we found is the second row seats didn’t have many adjustments. The standard position was fine though when comparing to other cars in the class it becomes a negative.

Whenever I jump into a new car it takes a few days to explore the infotainment system. Each manufacturer has their own quirks and we found the Caddy system to be no different. Once we worked it out in the base model it was very user friendly. 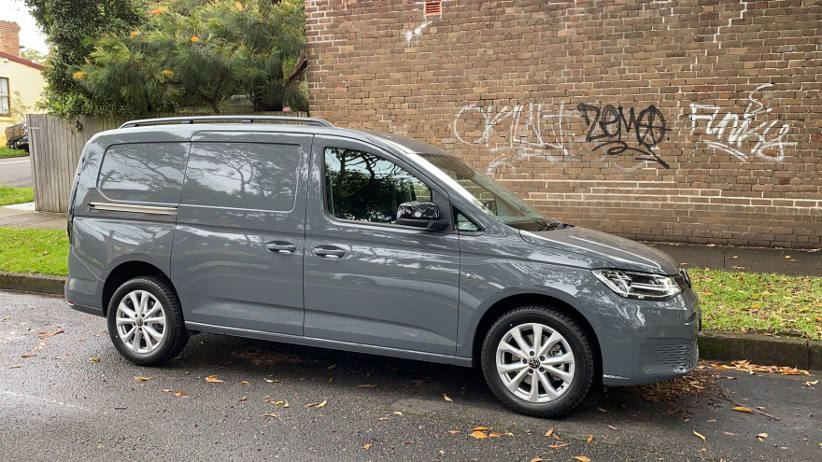 I also got to drive the Caddy Cargo long wheel base which was the same size without the seats and windows. Surprisingly it was a higher level of specification with a push button start and better sound system. It was also fully loaded with all the safety options.

Because it was new there were no squeaks or groans which made the drive very enjoyable. I did have issues with climate control and infotainment interface. Even after several days we still didn’t get the hang of it.

Overall I think the Volkswagen Caddy has a great future with small businesses or on-demand delivery market. The ability to get the Crew version with seats, (or the Caddy with seven seats and a moveable 3rd row) provides flexibility to transport goods or children. 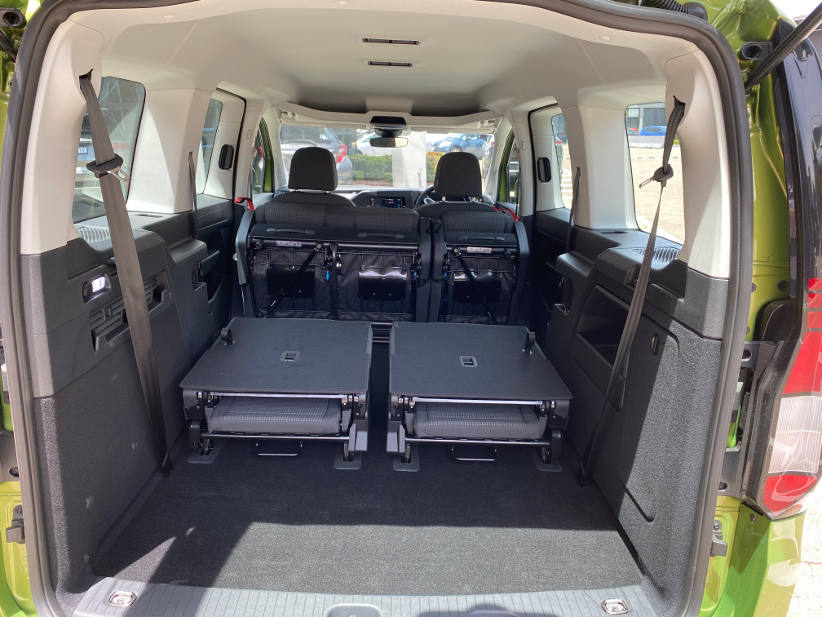