Hyundai has started fleet trials with the IONIQ hybrid

The cars are proving popular with drivers and fleet managers alike.

“We had an opportunity to import a small number of IONIQ Hybrids in advance of the full launch mid-year, so we placed them with fleet customers to get real-world feedback about the cars’ performance and practicality.

“The fleet customers are leasing the cars at a special trial rate and so far the program is going extremely well. The car is well liked and is proving cost effective, reliable and comfortable to drive, with users averaging around 4.0l/100km in everyday urban driving. Feedback so far is very positive.”

All three IONIQ drivetrains – hybrid, plug-in hybrid and full electric – will come to Australia later in the year and will be launched together. Pricing and full specification details will be announced closer to the launch date.

The petrol-electric IONIQ Hybrid produces 104kW from its 1.6-litre engine and electric motor, matched with a useful total of 265Nm of torque. Its official combined fuel consumption is 3.2 l/100kms.

“Already the IONIQ is proving to be cost efficient and the safety features are on par with what we’d expect from a higher cost vehicle,” Australian Red Cross fleet manager Greg McClure said.

“Overall we’re getting about 3.5L/100km and we’ve recorded about 900km to a tank. For the staff and volunteers using these cars this means fewer trips to fill up and more time in the communities we serve.”

“We’re always trying to save costs, become more efficient and environmentally friendly, and having the latest technology for our fleet has been a great boost.” 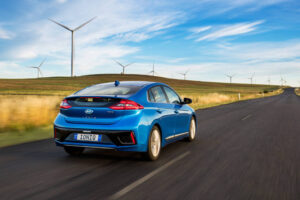