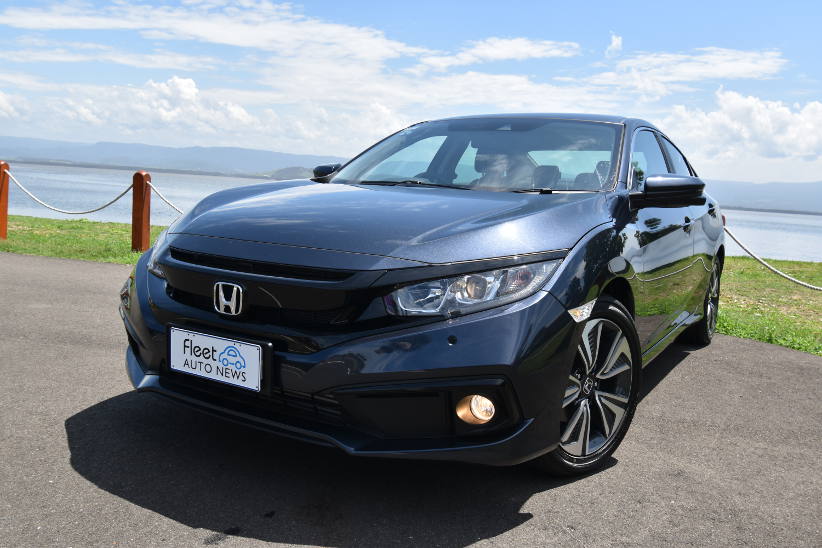 Today, with so much to do with so little time, it’s good to have somethings that can be relied on, to just do what they’re meant to. Quickly, quietly and civilly, without fuss, time and again every-day. And that’s exactly what I got from the Honda Civic sedan.

The Civic has graced our roads since 1972 (I actually did my driver’s test in a Civic and passed too) and has always been a favourite with Australians providing reliable and economical motoring.

Civic sedans come in five variants from the base model VTi through to the top of the line VTi-LX. I sampled three models (VTi-S, VTi-L and RS) which gave an interesting insight into the level of equipment, technology and appointments across the Civic range.

Sleekly styled, the Civic sedan in all models is an attractive looking car from all angles, with distinctive features, like an aggressive grill design and unique taillights that make Civic stand apart on the road from other makes.

Honda Sensing is available on VTi-L model Civics and above. Providing a suite of safety features designed to support the driver in keeping their Civic safe on the road. Including Forward Collision Warning, Collision Mitigation Braking, Lane and Road Departure Warnings, Lane Keeping Assist and Adaptive Cruise Control.

VTi-S – Just what you need

Of the three models I sampled, VTi-S, I know is the one that my Fleet Manager would approve of, “Everything that’s needed, nothing more” is what she’d say. But while it misses out on the turbocharged engine of the upper models, its 1.8lt VTEC engine gets the job done if not a little noisily. The same CVT transmission is fitted to all Civics, but VTi-S succumbs to the transmissions shortfalls, as in this model it seems to inhibit the engines output. Put the foot down accelerating onto the motorway, it buzzes and whirs and then, gets you there. Don’t get me wrong, its smooth and comfortable, it’s just that you’ll have more time to enjoy the scenery. Fuel is economy is reasonable, but isn’t as frugal at the bowser as its turbo siblings.

About town VTi-S, is effortless to drive, getting on with the job of providing a comfortable drive experience that fits seamlessly into your day, every-day. The seats might be fabric, but I found them quite acceptable with plenty of space for all inside. Rear seat head and leg room is quite generous, especially considering the low slung ‘coupe like’ roofline.

Boot space is voluminous, for this size vehicle, allowing you take as much stuff as you and your passengers need.

Then, there’s LaneWatch, (a camera embedded in the left-hand exterior mirror showing you who/what is in your blind spot on the reserving camera display). It’s activated manually by a stalk-mounted button on the left-hand indicator or via the indicator itself on VTi-L models and above. I found it a novel idea, if not a little distracting and thought a proper Blind Spot Monitoring system protecting both sides of the car preferable.

As an every-day car for the fleet driver or the family VTi-S, will fit the bill nicely, doing everything you need, including pleasing your fleet manger.

Things are really looking up! 1.5litre turbo! Flappy paddles, leather seats, premium 10 speaker sound system, and it’s “Phoenix Orange”!! The Fleet Manager mightn’t be pleased, but you will be!

Civic RS the sportiest Civic offered in the line-up (except for the boy-racer Type R – yeah baby) and ups the Civic looks in the style stakes significantly, with black 18” alloys, large RS badging and rear wing. Doesn’t sound much, but in the metal it has the look.

Its very comfortable in the cabin with leather seats all round (heated in front) and dual zone climate control, but no rear air vents. There’s masses of storage space including a two level open shelf space in the centre console to store your phone (and a few others) away whilst driving. USB connection for Apple Car Play is on the lower shelf and is a bit difficult to access, but once connected I just ran the cable through the open slot between shelves and left my phone on the upper shelf in front of the transmission selector – easy.

Extra equipment/features adorn the RS over other grade models such as DAB radio, power adjustable driver’s seat and standard ‘drilled alloy sports pedals’. But what I really liked is the literally brilliant LED head and fog lamps – they just turned night into day.

RS was a pleasure to drive, sharp and responsive, well balanced and quite willing to push on when pressed navigating your favourite twisty tarmac, as did all three Civic I drove. But with only 127kW the RS, thanks to the CVT, feels a little underpowered for what it is at this price point, around $32K drive-away, particularly when you compare the i30 N-Line with 150kW, which sells for under $30K drive-away.

That said, RS is an excellent small sports sedan and certainly has the looks to match. It’s not a Type R, nor does it try to be, but it also has a price tag that $25K less.

VTi-L – The pick of the litter

The ‘Goldilocks’ model I think – just right. VTi-L the middle range model in the Civic sedan fleet and the best balanced combination of appointments, style and performance. It’s the model Civic that your Fleet Manager should say yes to (especially if you push them a bit).

For a start it has Honda Sensing with its impressive suite of safety features and driver aids, has the 1.5 litre turbo engine and out of the three models tested, has the best listed fuel economy at 6.0lt/100km (although I saw a best of 6.9lt/100km – which also was the best of the three). Also there’s stylish 17” alloys, fabric seats, eight speaker stereo, Bluetooth and single zone climate control.

It’s hard to explain, but despite having the same engine transmission combination as the RS, the VTi-L actually felt ‘punchier’ than the RS! It was very spritely under acceleration and felt more willing to go than what the RS I drove did. The only thing I could put the difference in feel down to, was that VTi-L is 32kg lighter than the RS, but I wouldn’t expect that to make such a difference.

One thing I noticed driving the VTi-L (but its standard across the range) is the infotainment system controlling the fan speed on the climate control when you speak to Siri (Apple Car Play). Basically, the car automatically reduces the fan speed when are about to give a voice command, so as to reduce excess noise in the vehicle cabin, allowing the system to more accurately ‘hear’ what your voice command is. After suffering many arguments with voice recognition systems in many cars over the years, Honda’s solution is very clever!

Honda offers a five-year, unlimited-kilometre factory warranty with capped-price servicing on Civic. Service intervals are every 12 months or 10,000km, with the first five services at $281 each.

Civic is small sedan with a long and illustrious history, now fighting in an SUV world. Priced from a bit over $25K drive-away it offers many things to many customers, from the sporty and stylish RS, to the everyman special VTi. Looking for an everyday car for your next novated lease? Civic will go hand in glove, complimenting your lifestyle as a reliable and dependable vehicle that is a pleasure to drive every-day. Civic, truly is the civilised sedan.

Disclosure: The editor at FAN owns a Civic.