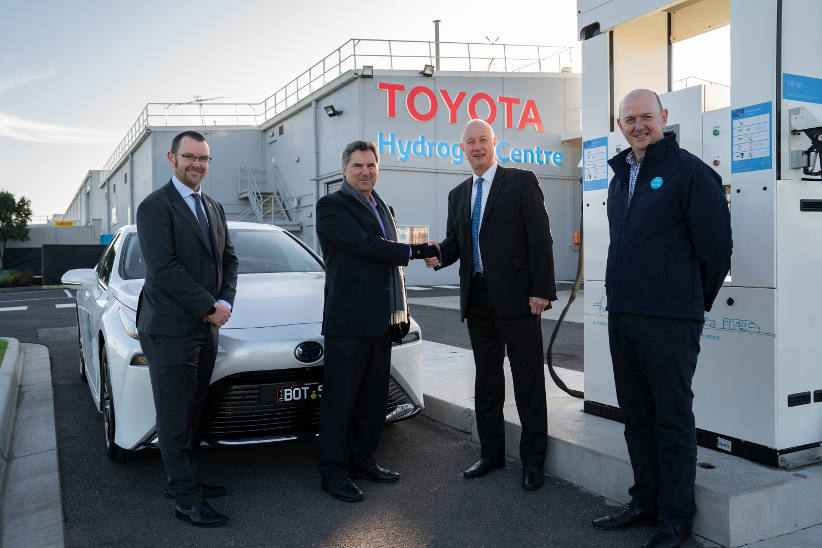 It makes sense that the first hydrogen powered fleet vehicle is delivered to Australia’s national science agency. The CSIRO has been at the forefront of technology and innovation in Australia since it was founded in 1916, and Toyota’s fuel cell technology is breaking new ground for fleet managers and novated lease buyers that are looking at zero emissions vehicles.

The CSIRO will lease the all-new Toyota Mirai FCEV (fuel cell electric vehicle), which uses hydrogen to power the car and emits only water vapour. The vehicle will be used for testing at CSIRO’s test hydrogen refuelling facility in Victoria, currently being developed.

As part of its commitment to a sustainable future, Toyota Australia is importing 20 second-generation Mirai FCEVs to lease to progressive businesses and organisations for three years to further demonstrate the viability of hydrogen fuel cell technology.

Toyota Australia Manager Future Technologies and Mobility, Matt Macleod said Toyota was committed to providing a range of electrified vehicles on its path towards carbon neutrality as part of its zero emissions goal under the Toyota Environmental Challenge 2050.

“Toyota Australia is proud to be able to work with the CSIRO as a partner to demonstrate the viability and potential of fuel cell electric vehicles like the Mirai,” Mr Macleod said.

“The Toyota Mirai is already on sale in the UK, Europe and US but here in Australia, a lack of refuelling infrastructure has been the biggest challenge to introducing vehicles like Mirai.

“However, that is slowly changing with the commissioning of our own commercial grade hydrogen production and refuelling facility1 at the Toyota Centre of Excellence at Altona in March, and the CSIRO’s own plans to build a small-scale hydrogen refueller as part of the Victorian Hydrogen Hub (VH2) on the other side of Melbourne at Clayton.

“By working with the CSIRO and other like-minded business, industry and government partners, we can demonstrate that FCEVs can play a significant role in helping to reduce our carbon footprint and secure a sustainable future for a range of transport and energy requirements,” he said.

CSIRO Chief Executive Dr Larry Marshall said the organisation’s newly launched Hydrogen Industry Mission was the key to creating a new industry for the future energy needs of Australia and the world.

“Australia can become a renewable energy leader through the production, use and export of hydrogen, but it will only become a reality if we breakthrough the $2/kg barrier. That needs Australia’s world class science working with CSIRO’s commercialisation expertise turning breakthrough science into real-world solutions,” Dr Marshall said.

In the new generation Mirai that the CSIRO will lease, hydrogen is stored on board in three carbon-fibre tanks that gives a range of approximately 650km2. Refuelling the tanks takes between three to five minutes.

The onboard hydrogen is combined with purified air from the atmosphere in the fuel cell. The subsequent chemical reaction produces electricity to drive the rear electric motor or recharge the large battery, as needed, generating zero carbon emissions.