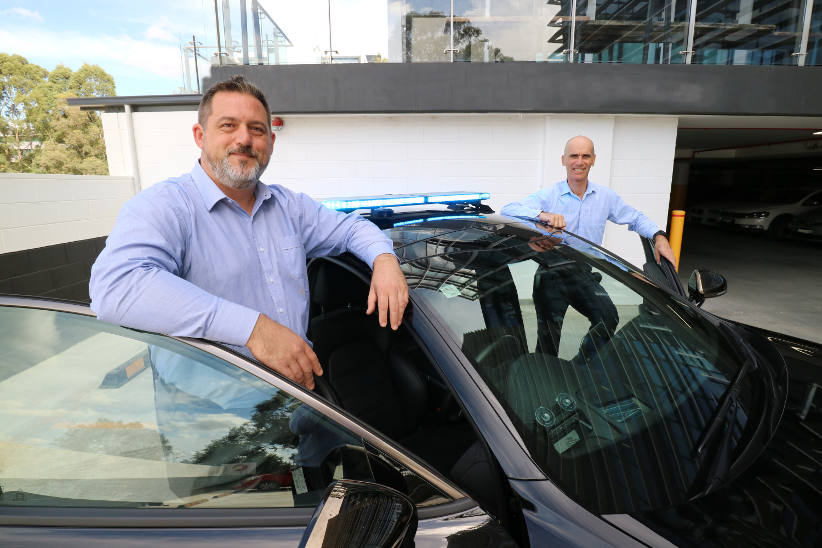 One of Australia’s most dangerous workplaces has become just a little bit safer thanks to ground-breaking development from Fujitsu and Kia Motors Australia.

Police, emergency services, security services and couriers will all potentially benefit from the work done by Fujitsu in developing a prototype of an artificial intelligence-enabled digital police car of the future.

In collaboration with an ecosystem of partners, working closely with KIA Motors Australia, Fujitsu has demonstrated that it can remove surplus equipment, software, hardware, and cabling from police highway patrol vehicles by integrating the required information systems and response controls into KIA’s existing integrated systems and entertainment display.

Fujitsu created a software-based platform that links disparate technologies, reducing the cost of installation and de-installation, while providing a cleaner and safer cabin for law enforcement officers and others who work from their car.

Together, Fujitsu and KIA used the manufacturer’s standard Stinger model to develop a turnkey solution. The car’s existing Infotainment screen, which is shared across the Kia range, is programmed to present information and execute emergency response controls.

The benefits of this set-up include:

“We identified the amount of systems redundancy within the current vehicle fit-out and were excited to work with Fujitsu to push for a higher degree of integration of law enforcement systems within the Stinger. By reducing the amount of physical technology within the car, the vehicle can be modified or serviced by any KIA dealer in Australia, reducing the time previously spent servicing vehicles at specialised facilities.”

The Stinger’s core performance and safety characteristics have played a key part in the decision by state police forces to integrate the vehicle into their road policing divisions. The Stinger, in standard form, is capable of 0-100 km/h in 4.9 seconds and has a five-star ANCAP safety rating backed by a seven year warranty.

“The development of this ground-breaking technology and its potential for integration into a wide range of Kia product highlights the outside-the-box thinking that Kia has always embraced,” KMAu Chief Operating Officer Damien Meredith said.

“KMAu was the first country in the world to supply the Stinger for police work, and now to be a part of this development is both exciting and satisfying.”

As well as the technology benefits, there are other cost-saving opportunities such as less weight of copper cabling throughout the car reducing power draw on the vehicle, resulting in greater fuel efficiency.

Furthermore, Fujitsu’s solution will remove up to seven existing logins by embedding biometrics into the gearstick, a natural position for the palm when starting a car. Fujitsu’s Palm Secure secures sensitive information, while three single-feature action buttons on the front of the gearstick control emergency lights and sirens, enhancing the safety of officers who are no longer required to take their eyes off the road to operate a complex control pad.

Ian Hamer said, “Fujitsu’s goal was to develop a car that looked like a regular vehicle rather than a highly modified police car. By integrating systems into the inbuilt systems in the vehicle, we were able to remove excess bracketry inside the cabin.

“Working closely with emergency warning systems specialist Whelen Engineering, the team designed a new modular configuration of the lightbar that will result in a less invasive installation using one umbilical cord instead of nine separate cables.

“As a result, cameras placed in the lightbar are at the optimum height to record video evidence. This umbilical cord will then be mated to the KIA’s core wiring loom for simplicity of installation.”

Fujitsu will also integrate the radar into the car’s existing head-up display, removing the dash mounted control box and irritating doppler tone produced when using the radar. In phase two of this development, artificial intelligence (AI) capabilities will identify a target car’s manufacturer and colour using onboard cameras, and these will also be able to recognise stolen cars in a busy carpark and traffic. The technology will be able to detect if an offender has drawn a weapon and automatically send duress signals.

Fujitsu and KIA have developed a concept car to demonstrate the approach to police forces in Australia. The initial project was funded by Fujitsu’s Incubator Fund, which is utilised for investment in development of innovative technology solutions with a view to future commercialisation.

“We believe this approach has a much wider application than just use within the police force. Fujitsu is working to develop an enhanced vehicle ecosystem by extending the technology to meet multiple vehicle needs including ambulance, fire and rescue services, security vehicles and taxis.”