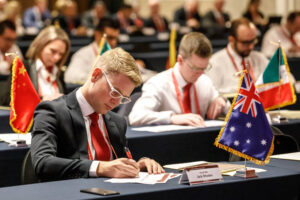 Rhodes and Smith won their way to the finals by defeating four other Australian finalists in a full-day competition in Sydney earlier this year.

In the Seoul finals they were up against 46 contestants from 42 counties, all of whom were competing in a comprehensive range of disciplines. The competition tested their customer service skills through role plays, theory, and video tests.

At the end of the day the Gold Medal went to Claudia Maria Grados Risco from Peru, just ahead of Rhodes (who works at John Hughes Welshpool in West Australia). Rhodes tied for second with the Kuwaiti representative.

Smith, who works for the same John Hughes WA dealership, finished third in a three-way tie with competitors from Oman and Bahrain.

Kia Motors Australia’s Head of Aftersales, Phil Murray, said the result was the first time that any country had claimed two podium positions in the finals.

“While the overall standard of the Skills Cup is improving every year, this result is clear vindication of the training programs KMAu has been implementing over the past few years,” Murray said.

“These training programs are bearing fruit in the overall quality of the customer service in the network and subsequent improved customer experience and engagement.”

Where Do All the Old Tyres Go?