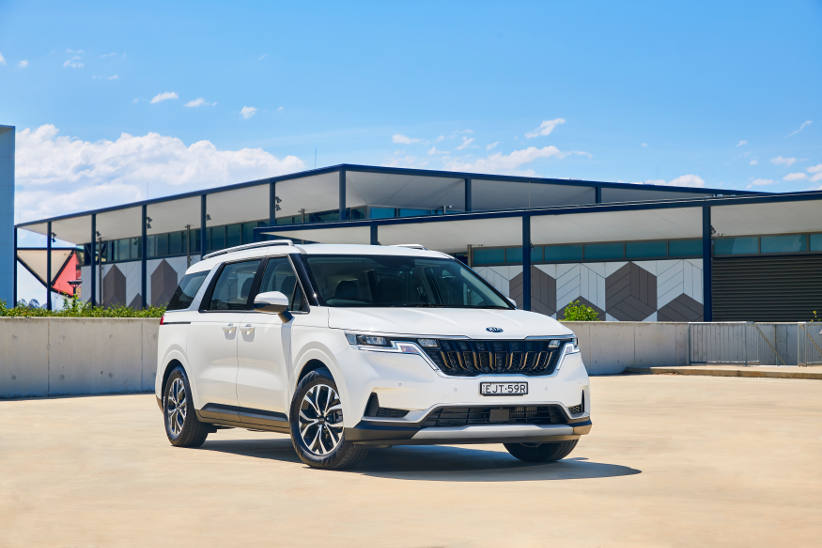 First impressions – It’s big! But it doesn’t feel big when you’re driving. Why? Because it’s a GUV! The first thing we noticed was the quietness inside the cabin. Almost zero wind noise and no road noise which was surprising in such a cavernous interior.

GUV stands for Grand Utility Vehicle which is not an actual segment in the automotive industry but something the Kia marketing team made up to make people movers sexy. And I think it’s worked based on the exterior styling, driving performance and the current advertising.

We got to drive the SLi with the V6 SmartStream petrol engine which is one step below the first class Platinum model. It has enough nice touches so it doesn’t feel like economy. This is important when your family grows in size and you find yourself reluctantly considering eight seats for your next novated lease.

To keep the family safe the Carnival is packed with technology. Kia has adopted the motto of ‘you don’t need to pay extra for safety’ with recent model releases. This is great because in 2021 you shouldn’t miss out on the latest active and passive safety technology with your novated lease because you can only afford a base model.

In the SLi and Platinum you do get some extras such as SEA (Safe Exit Assist) and Around View Monitor (360° Camera Display). For this reason we are recommending the SLi model as an entry point for any novated lease. The overhead 360 degree camera view is something you’ll use all the time when parking. At the time of writing, the difference in driveway price between the Si and SLi is less than $5,000. Over 48 months it would only be $100 per month before the tax benefits.

The driving position is like an SUV. You are seated up high and it doesn’t feel like a you’re driving a van which is the case with some competitors in the segment. The driver’s seat has electric adjustments and once the position was set there was no need to change it. The lumbar support was only used on some longer trips.

We found ourselves asking, would you buy a Kia Carnival if you only had two kids? Size and cost are a consideration with a novated lease so it would be a hard sell to most families. And ‘fit for purpose’ is a Fleet Manager’s mantra which also applies in the real world. But during our extended test drive we found out how practical a people mover can be as a family taxi.

The kids just loved the room. They said the extra space felt like luxury (maybe a reaction to recent COVID lockdowns). The space certainly reduced the number of squabbles over the middle seat and the transmission of ‘boy germs’. We removed the middle seat in the second row to create an aisle and it changed the way the kids interacted on short trips and longer excursions.

A really cool feature is the Passenger Talk button. When pressed the rear speakers become an intercom so rear passengers can clearly hear the conversation from the front. A novelty at first but something that became really useful.

Our favourite safety feature is the Speed Limit Information Function (SLIF). A camera in the windscreen identifies the local speed limit from the road signs and displays it on the instrument cluster. Then using Advanced Smart Cruise Control (ASCC) you can set the cruise control to the current speed limit with one touch.

Using this feature took away the stress of driving in unfamiliar areas and through school zone during the week. It’s also great when there’s road work. 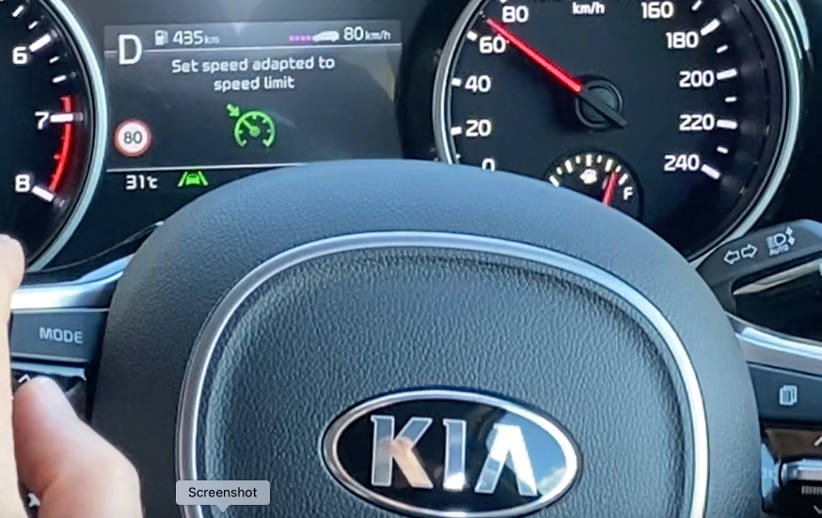 With a vehicle this size you expect cup holders. The Kia Carnival has nine cup holders and four bottle holders. It also has four phone holders. Handy slots located in the front and centre consoles; also in the rear when the middle seat in the second row is folded forward. Another feature you didn’t realise you needed until it’s there.

The practicality of the Carnival isn’t just on the inside. Its key is one of the most functional we have seen. The purpose of a key is to lock and unlock the car which it does. The shape and location of the lock button makes it easier to do while leaving the key in your pocket or handbag; or in the dark. With the Carnival key you can also start the car or open the side doors and tailgate.

Overall we loved the new Kia Carnival. Even now we turn our heads when one drives by asking, is that a people mover or GUV? 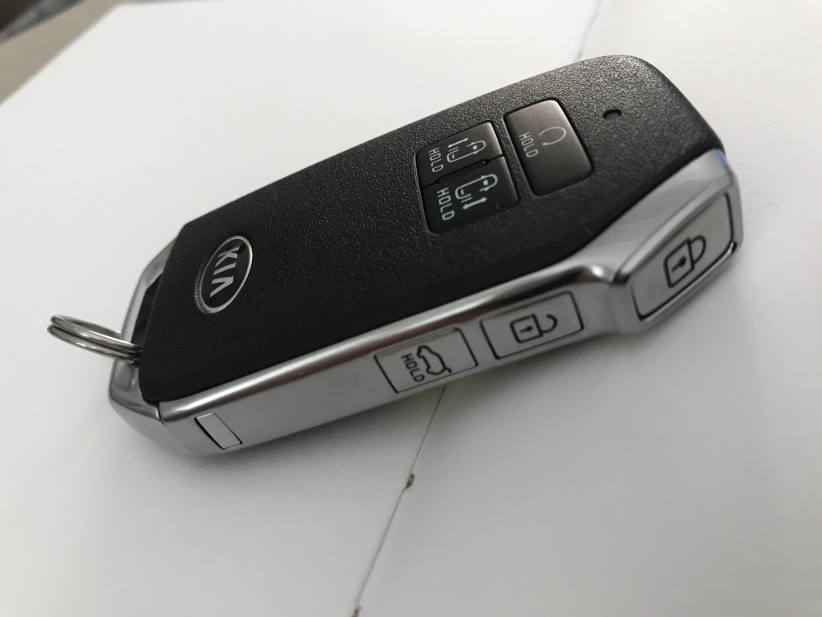 A great key! You can open the side doors and tailgate.