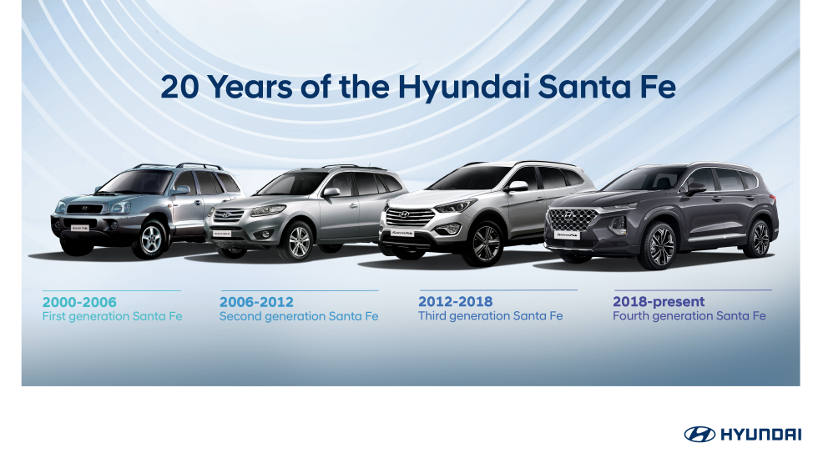 After 20 years the Santa Fe is better than ever

Can you believe it? It’s been 20 years since Hyundai introduced the first model Santa Fe in 2000. The year of the Sydney Olympics. Hyundai was a pioneer in the SUV market though previously Australians had known the brand through the top selling Hyundai Excel.

Having entered dealerships in 2000, Santa Fe is one of Hyundai’s longest-running models in Australia. Now in its fourth generation (which is an FAN favourite), the Santa Fe has undergone significant evolution in its design, safety and technology over the years, often leading the way as a flagship for new features. Later this year, Hyundai will launch an enhanced version of the current generation incorporating major design updates.

Following its launch two decades years ago, Santa Fe quickly became one of Hyundai’s most popular models. Named after a city in the South Western U.S., it was the company’s first SUV, and played an important role in establishing Hyundai in the SUV segment.

Unusually for a Hyundai model, the Santa Fe has its own logo showing the model name and a sun, while its name has been carried over to future generations, continuing its heritage. Over the past 20 years, Hyundai has sold more than 5,260,000 units of Santa Fe globally.

“The Santa Fe was Hyundai’s first SUV, and it is one of our longest-running model lines, making it a key model not only globally, but also in Australia,” says Jun Heo, CEO Hyundai Motor Company Australia. “For Hyundai it is an automotive icon which continues to evolve in terms of design, technology, roominess and comfort. With this latest evolution, Santa Fe maintains its status as a flagship model in our broad SUV portfolio, and further underlines our heritage in SUVs while also moving the game forward with its innovation.”

Hyundai first introduced the Santa Fe to Australians in late 2002. While subsequent generations became progressively premium over time, the very first Santa Fe was practical and appreciated for its functionality and reliability. In 2001, not long after the first model was produced Hyundai had to ramp up production due to the overwhelming demand in the U.S.

The first generation Santa Fe featured a rugged, yet refined look and was substantially longer and wider than many of its rivals in the segment, emphasising its practicality for off-road driving. The spacious interior offered enough room for up to five passengers, as well as ample cargo space. Meanwhile, its convenience features, which included air conditioning, a CD player, as well as electric windows, mirrors and a sunroof, were comprehensive for the time.

In 2003, in response to customer demand for even more driving performance, Hyundai upgraded Santa Fe with a more powerful engine and a computer-controlled four-wheel drive system.

The second-generation Santa Fe was launched at the North American International Motor Show in January 2006. It featured a new 2.2-litre diesel-powered engine and an updated 2.7-litre petrol-powered V6 while offering significantly improved handling and sportier engines to equip customers for a range of driving and weather conditions.

By the middle of the 2000s, design was becoming increasingly important to customers. Therefore, the Santa Fe’s successor model featured significant changes outside and inside the vehicle. Its exterior offered an assertive front grille, confident sculpted lines and finely detailed headlights. This contemporary look showcased how the brand’s design direction was evolving.

The interior utilised a range of soft-touch, high-quality materials and low-gloss surfaces to provide second-generation Santa Fe customers with a touch of luxury. This premium feeling was further emphasised by the blue backlighting which surrounding the model’s controls and switches, in combination with leather upholstery. Meanwhile, it offered more space than before, as for the first time, the option of adding a third row of seats was available, extending the five-seater to a seven-seater.

The third-generation Santa Fe was a big step forward for Hyundai, as it offered even greater comfort and quality, re-tuned engines and improved efficiency. In addition, it featured a new design direction called “Storm Edge”, which consisted of refined lines as well as bold and voluminous surfaces. By adding a more emotional, muscular look and a wealth of premium features, the company demonstrated it was moving away from offering a purely functional SUV, and instead a sophisticated lifestyle vehicle.

Available as both a sporty five-seater and a version with a long wheelbase offering three rows of seats for six or seven passengers, the third-generation Santa Fe also boasted a refreshed unibody crossover platform. The long version received a slightly differentiated design, including a unique hexagonal grille design, a new look for the B-pillar, optional 19-inch alloy wheels and flush dual exhaust tips. This illustrated that, in addition to maintaining the earlier model’s strengths of practicality, roominess and dependability, the new model looked modern and dynamic, making it an ideal proposition for to conquest new customers to the Hyundai brand.

Both Santa Fe models offered a similar interior look, fully geared towards passenger comfort and functionality. In the early 2010s, advances in technology gave automakers the opportunity to improve their customers’ comfort and driving experience with a range of intelligent connectivity features. As a result, the third-generation Santa Fe offered an optional multifunction eight-inch touchscreen with navigation with a simpler and more intuitive user interface as well as enhanced voice recognition commands, while phone connectivity was also improved.

With the third generation Santa Fe, Hyundai reinforced its commitment to providing its customers with class-leading safety features. These included a premium braking package, which contained four-wheel disc brakes, an Anti-Lock Braking System (ABS) including Brake Assist providing maximum braking force when a panic stop is detected, and Electronic Brake-force Distribution (EBD) to automatically adjust the braking force to front and rear axles based on vehicle loading conditions. By offering these levels of state-of-the-art active safety technology, the third-generation model ensured improved protection for drivers, passengers and pedestrians.

Building on the success of its previous generations, in 2018 Hyundai introduced the fourth-generation Santa Fe. Its premium feeling is illustrated by its prestigious appearance, while it is equipped with the most advanced technology as well as best-in-class safety features and exceptional roominess.

The elegant SUV model features a bold outward appearance with a wide, athletic stance. Hyundai’s signature Cascading Grille decorates the front, and the side is enhanced by sleek lines which stretch along the roof and from the headlights to the taillights. This reinforces the car’s status at the top of Hyundai’s SUV line-up. Inside, it is the roomiest Santa Fe yet, with 38mm more leg room in the second row.

Equipped with Hyundai’s latest SmartSense technology, the fourth-generation Santa Fe is among the safest in its class, and it received the maximum five-star safety rating from Euro NCAP and ANCAP.

Hyundai demonstrates it continues to care for its customers by offering even more innovative features, including Hyundai’s in-house developed and industry-first Rear Occupant Alert, which uses an ultrasonic sensor to detect the movement of children or pets on the rear seat and alert the driver when leaving the car.

Another safety feature is Rear Cross-Traffic Collision-Avoidance Assist, which scans a 180-degree area behind the vehicle, warning the driver and applying the brakes if necessary to avoid collisions. Additionally, for the first time in a Hyundai SUV, the fourth-generation Santa Fe features a full head-up display that projects relevant information onto the windshield to keep the view clear while driving.

The current generation Santa Fe features HTRAC, Hyundai’s advanced four-wheel drive system with an enhanced torque application depending on wheel grip and the speed of vehicle. It supports drivers in all kinds of driving situations, whether on snow, slippery roads or in regular road conditions, and enhances stability in cornering.

18 years after the introduction of the first-generation model, this powerful, elegant SUV has evolved to become Hyundai’s premium flagship model in Australia. The continuing improvements the Santa Fe has undergone over the past two decades demonstrate Hyundai’s commitment to developing quality products with the latest features for its customers. Further details on the enhanced fourth generation will be revealed in the near future.